Just two days left and with Call of Duty: Black Ops 4 one of the most anticipated games of the year will be released. We’ve played the Blackout multiplayer mode extensively and describe our impressions in detail in the subsequent preview.

Oh, Call of Duty (CoD)… a franchise that could never excite me. Interestingly Treyarch manages with Blackout to create a mode which could at least pique my interest. Naturally, this doesn’t really bring anything new to the table. Gameplay is similarly plain as in Fortnite and the likes. 100 players fight each other to survive on a spacious map, collect weapons, ammunition and other gear and those remain standing win the round. At the beginning the map is confusingly huge but as the rounds progress it gets increasinly smaller which in turn forces players to fight at the end of the match. That doesn’t appear to be very complex and thus those new to the genre have better chances to succeed than in Fortnite.

Where in competing games it is vital to build structures and players are challenged in a different way, in CoD the outcome of any given confrontation is based on your position and the equipment you’ve collected. Blackout is a lot slower than a round of deathmatch but the focus shifts to a more tactile approach. It’s just a matter of time until you die if you’re not prepared for the huge map and accompanying possibilities. Naked fists won’t prevail in a gun fight. 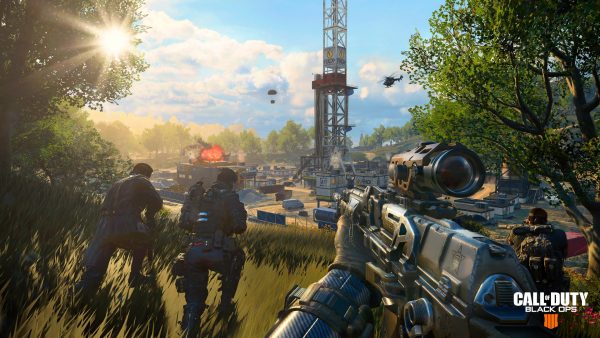 In Blackout you use the majority of the time to scavenge your environment for all kinds of loot. Backpacks extend the initially very small inventory and weapons can be modified by applying a variety of attachements. Even a seemingly terrible gun can be upgraded to be able to defend yourself decently enough. Speaking of weapons: There’s a broad range of fire arms but there are no real surprises. Besides the usual guns you can find very rare power weapons like a cross hook and a zombie spawning trap which loosen up the the range.

The map is made up of small villages, a run-down sanatorium and an iteration of the popular CoD map Nuketown. In some areas even zombies can be found. Once killed they frequently drop rare loot but since they’re very aggressive and fighting them causes a lot of noise, a confrontation with the undead is always a risk of life and limb. In most of my sessions those areas were pretty much avoided by players as the risk isn’t worth the reward. That is unfortunate since those AI enemies are one of the few additions the game brings to the Battle Royale genre. 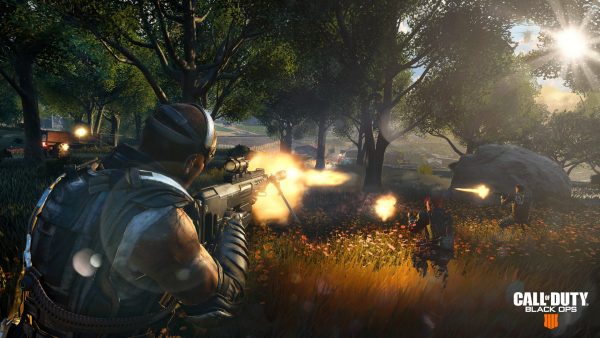 If you’re not a fan of the genre, Blackout also won’t make you feel at home. In order to succeed that the mode would need to differ a lot more from the competition. Blackout faces problems of bad luck on quality of loot, sometimes boring dry periods between firefights and campers. At least the performance is a lot better than in PlayerUnknown’s Battlegrounds (PUBG).

I’m thrilled by this mode. A reason for this could be that my experience with the genre is limited Fortnite. For 12 hours the beta kept me engaged without pause but I’m not sure if that would be the case after 100 hours. Providing players with disappointing loot in zombie infested areas seem like a wasted opportunity that can still change upon release of the final game. It remains to be seen if the game will be really worth its 60 Euro pricetag.

I didn’t think that I’d enjoy the beta for Black Ops 4’s Blackout as much as I did. I’ve mostly avoided the battle royale genre, having only really played a few hours of Fortnite and deciding it’s not for me. I’d say the reason I enjoyed Blackout more is the guns, most of them feel much more satisfying to use than Fortnite and there’s a good variety of weapons to choose from. The wingsuit was also a nice addition, letting you dive off tall buildings without having to worry about fall damage. The mode’s balance was definitely not perfect in the beta though, some weapon types – mostly the shotguns – felt rather useless overall, and armour gives too much of an advantage. It also sometimes felt that loot was distributed unevenly. Sometimes there would be tons of guns but no healing items, then the next game it would be the opposite. As long as these issues are worked on for the full release, and maybe some more maps are added post launch, the final game mode should be pretty fun. 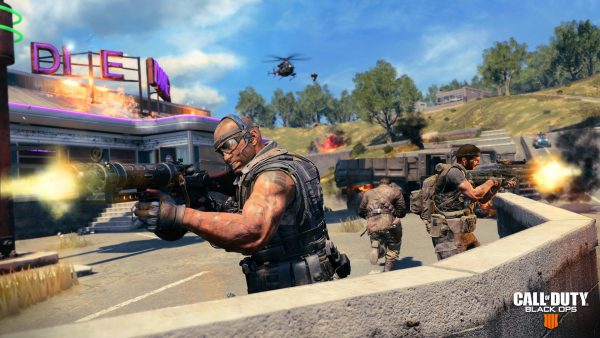 I’ve never been a big fan of either the CoD series or the Battle Royale genre. However, I must admit that the Black Ops 4 beta has only impressed me so far, even in the regular multiplayer modes. This also translated well to Blackout: I didn’t think that the Call of Duty gameplay and the Battle Royale formula could be mixed so well, but they did. I had a lot of fun sneaking around, trying to build the best loadout possible and being careful to not attract too much attention. The huge map that’s also a collection of previous multiplayer maps appeared in other Call of Duty games also helps making it the ultimate nostalgia trip. Overall, I think Treyarch is doing a wonderful job with this game (and they also listened a lot to feedback from the users), and I wish them the best of luck for this game. 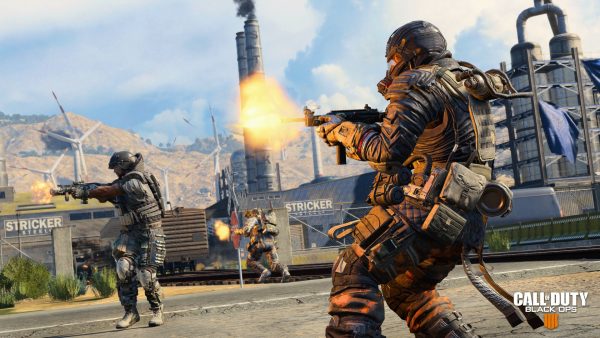 The only time I’ve touched the genre of Battle Royale games so far has been in the 6 hours in the Blackout beta of Call of Duty: Black Ops 4. I’m impressed by the massive map which is offers a variety of unique locations and the good performance on PlayStation 4 Pro while 100 players compete with each other. I’m disapointed by the range of vehicles and weapons since they’re limited to buggies, boats and helicopters and guns feel mostly similar. Also loot doesn’t give too much of a surprise. Level design is well executed and ensures locations in which thrilling firefights ensue. I’m looking forward to the final game and to try out the other modes the first-person-shooter offers.