Almost half of the Vita library is ports of older games that have been released on either this current gen or the previous one. (take a look at our special). It”s already becoming a trend with releases such as Disgaea 3: Absence of Detention, Dead or Alive 5 Plus, Persona 4: The Golden, The Walking Dead and dozens more. This time Vita players can get a taste of the latest adventure of Disney”s beloved character, Epic Mickey: The Power of 2.

Epic Mickey 2 brings the players back to the land of Wasteland, home to rejected toons from Disney”s backlog. Just when everything becomes normal again, a series of earthquakes destroys the entire town. If that”s not enough, the Mad Doctor (from the first entry) pays a visit and declares he changed his ways. He even informs them that the Blotworx spices is about to infiltrate their precious land.

Oswald, Wasteland”s leader, is confused by the whole situation and decides to call Mickey Mouse to investigate.

Although Epic Mickey 2 is a direct sequel to the 2010 Wii-exclusive release, newcomers can still understand every bit of it thanks to the simplicity of the story-line. So don”t be afraid to start this adventure if you haven’t played through the first one. 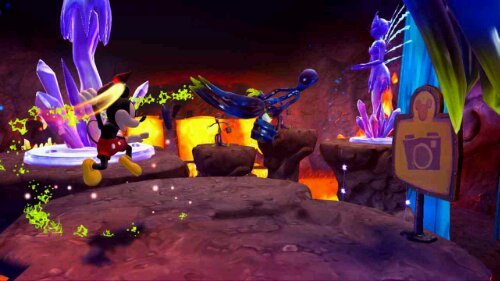 As for gameplay, Epic Mickey 2 continues the original formula of the franchise. In one hand Mickey holds a paintbrush and in the other he holds a thinner. By using the first one he can rebuild something broken, while the second tool destroys it. It”s quite nice to have the option to re-do some of your actions, but sadly the game doesn”t use those mechanics to create intriguing puzzles that requires you to think.

This brings us to another subject, the game”s difficulty.

Because the game is suited for both kids and adults, as the average adult gamer you won”t find a challenge through the entirety of the game; enemies are easy to “kill”, places are accessible to reach and there”s always enough paint to dye the whole city. One of the major issues we have with the game is that sometimes the game tells you the solution before you even saw that there”s a problem. 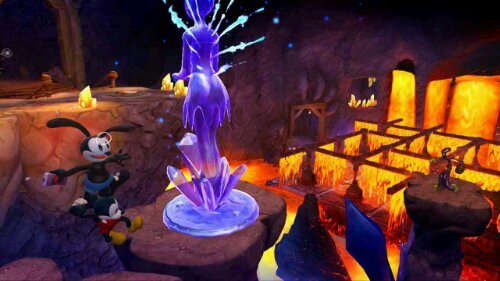 Another thing that we feel is negative is the AI (artificial intelligence) in this game. Unlike the first entry, Epic Mickey 2 is a game built for co-op play, but when you have no one to play with the computer takes its role as Oswald. Unfortunately, you must travel with this guy, so you”ll find yourself in sticky situations when he doesn’t follow your decisions and decides to act stupidly on his own. Therefore, we can more than recommend you to use network play on your Vita.

Although there are some problems with the gameplay mechanics, many people will manage to enjoy the game because of its Disney settings and the charming cartoon-ish animations, but we expected much more from the creator, Warren Spector, the man behind ground-breaking franchises like Thief and Deus Ex.

While it”s hard to recommend this game on PS3/Xbox 360 systems, it”s even harder to recommend it on the Vita, mainly because of constant frame-rate issues that may damage the experience for some. The Vita is more than capable of running this game (just take a look at games like Killzone: Mercenary), so it”s sad to see that the developers didn”t put enough effort to achieve greater results. 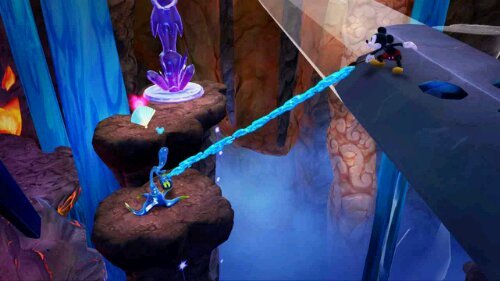 Despite Epic Mickey 2“s technical problems, Blitz Games Studios did a good job utilizing the controls for Vita. Now instead of using the joysticks, players can take advantage of the touch screen for painting. The controls are easier to master, and considering this game is suited for kids you won”t have to explain them much prior play.

– Great for kids and family

Epic Mickey: The Power of 2 is a great game for kids, especially for ones that take interest in Disney”s characters. If you are looking for a game to play with your family, this one will do more than fine.