It’s strange to see remakes of PSP games still being released in 2019. The Conception series is also odd in the sense that this is the original game’s first English release, with Conception 2 being our first introduction to the franchise. Is this still a game worth playing even after all these years? Considering all the great RPGs that have been released over the years, Conception PLUS doesn’t do anything particularly well in comparison. 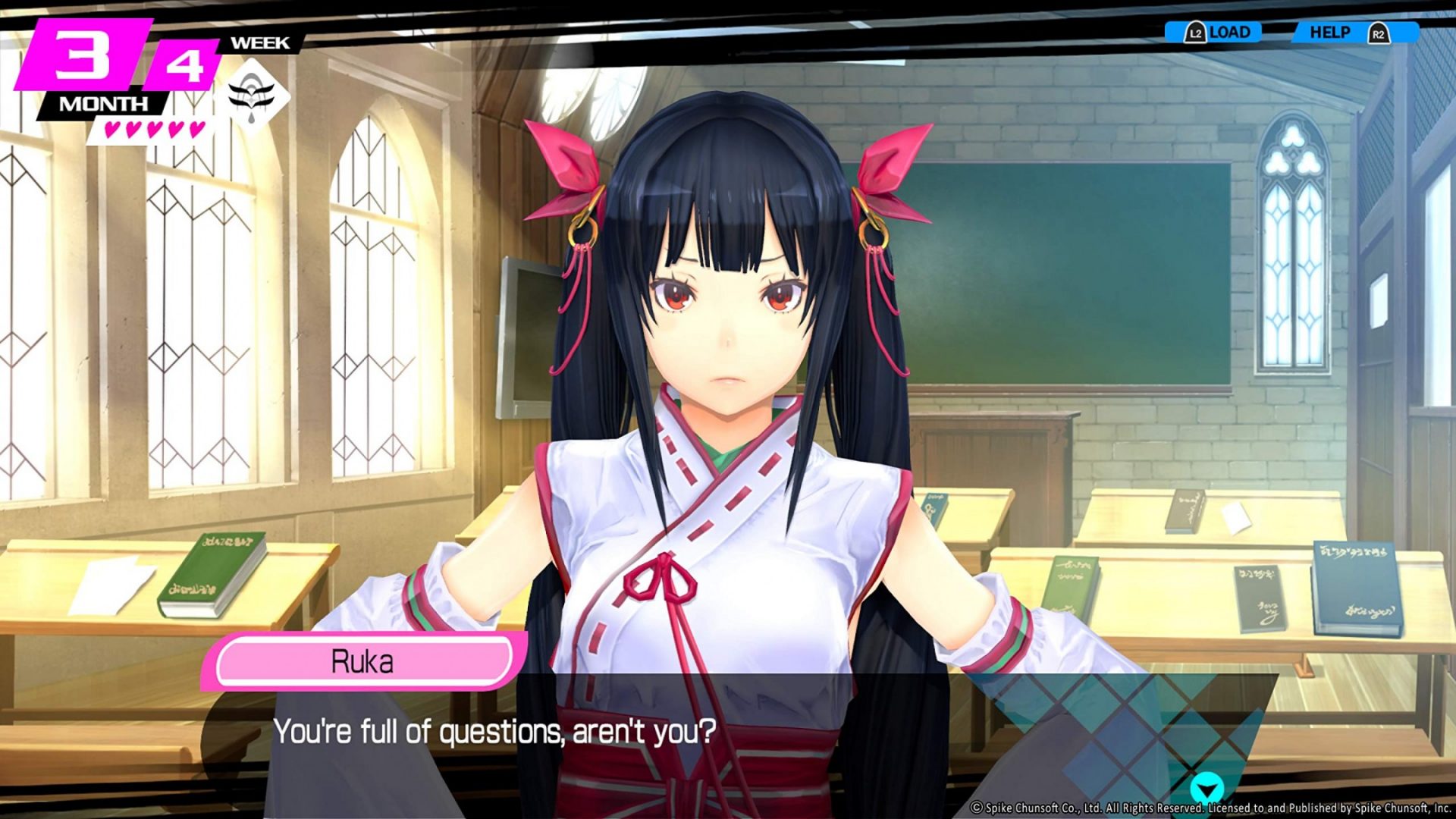 Conception Plus puts very little focus on its story, which isn’t too surprising for a fanservice focused game. The protagonist and his childhood friend are transported to anther world, where he’s tasked with saving the world from a buildup of impurities. As “God’s Gift” he must travel through the Stardust Labyrinths to purify the evils within, though this is only possible with the help of Star children. To create these beings, the protagonist must “class mate” with the 12 (plus 1 unlocked later) Star Maidens, something that is clearly an allegory for something else no matter how hard the game denies it. It’s an incredibly simple setup that never goes anywhere and is just an excuse to throw in as many perverted jokes and situations as possible.

Time in Conception Plus is split into weeks, with each week giving you the chance to interact with 5 of the heroines. Spending time with each girl takes the form of a simple visual novel-style section, where you chat and occasionally respond to questions. Certain choices are better than others, increasing your bond with that character, though can always save before making a choice and reload if you pick the wrong option. These scenes aren’t awful, but the fact there are 13 star maidens really makes it a chore to talk to everyone after a while. We eventually just stuck to 5 of them for most of the playthrough, and there aren’t really any downsides to doing so.

The main purpose of bonding with the Star Maidens is to create stronger Star Children for the dungeon crawling sections. Higher bonds with a character means increased level caps and better stats for the children you create. The Star Maiden (or maidens) you use to create Star Children with will determine their base stats, with each selectable class having a stat requirement. You’ll be creating children constantly throughout the game to create stronger and stronger parties, so we were never really attached to any of them. There’s only a couple of designs per class too, so it’s often hard to differentiate one child from another. 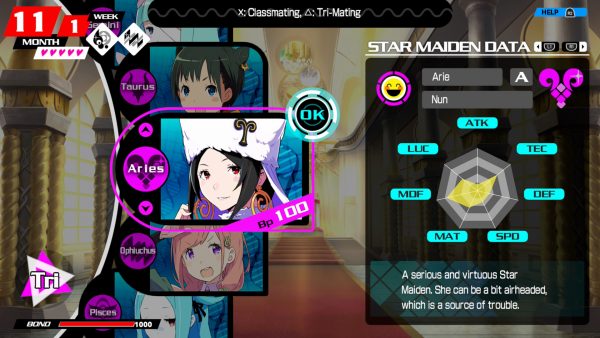 As for the rest of the town, there’s not much to do. Outside of the facilities relating the Star Maidens and class mating, there’s a shop where you gear up your party. Alongside this is a tavern, allowing you to pick up some basic sidequests. Unlocking new facilities and upgrading them requires you to retire max level Star Children, something that is a frequent occurrence during the game. It’s a simple system that lets you slowly build up the town, but the town itself is very one dimensional. As with the the world as a whole, not much time is spend building up the area you’ll be spending half your time in. Instead, it’s little more than a basic menu screen that just happens to be a town as well.

At least talking to the Star Maidens can be enjoyable at times, even with the weekly limit, as exploring the Stardust Labyrinths is just tedious most of the time. Each labyrinth is made up of randomly generated floors, with every 5th floor containing a boss fight. There’s very little variety between areas, and each floor is just made of bland rooms connected by corridors. It’s not a problem unique to Conception Plus as games like Persona 3 and 4 also suffer from boring dungeon layouts, but there isn’t even anything visually interesting here. Exploration isn’t particularly enjoyable because of this, since most chests just contain healing items that you’ll have more than enough of. 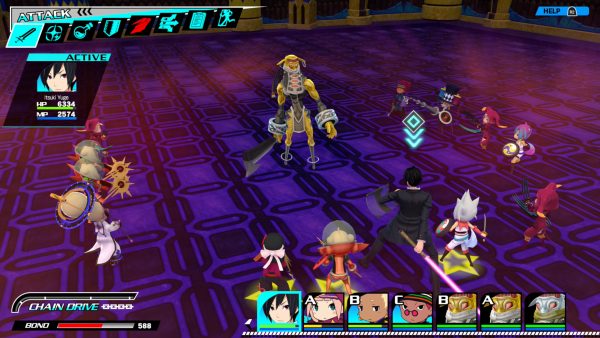 Conception Plus’ battle system does try something new, though it doesn’t exactly succeed. Monsters you fight can be attacked from one of four directions, with certain ones allowing you to do bonus damage. Enemies can also attack in these directions, meaning that you need to position your party to avoid these as well. In theory this should lead to more dynamic fights compared to a more traditional turn-based battle system. However, other than a few bosses most enemies enemies require little strategy to defeat. Instead of trying to control our party manually, it was often more beneficial to just leave the battles on auto. The occasional harder boss fight does benefit from the unique battle system, though even these aren’t overly difficult compared to other RPGs.

One are that is (mostly) well done is the remastered visuals. Character models are a large improvement over the original PSP release, which is a good thing considering how often you’ll be seeing them close-up during events. It’s a shame that most of them are ruined by comically exaggerated jiggle physics, something that inexplicably carries over to some of the animated 2D art. Monster design is also fine, if a little uninspired at times. Dungeons though are completely bland, mirroring their cookie-cutter floor layouts.

Despite its flaws, Conception PLUS: Maidens of the Twelve Stars isn’t the worst JRPG we’ve ever played. It’s just an exceedingly average game, with neither the VN or dungeon segments being anything special. 2019 saw some stellar RPG releases, and 2020 seems to be starting off strong as well, so it’s hard to recommend this unless you’re really desperate for another JRPG to play.