Football Manager 2022 is finally out and this year’s edition of the popular game made by Sports Interactive is also available for free via Xbox Game Pass, which is an amazing opportunity to try out this incredible series.

While the core mechanics of the game didn’t change that much compared to last year, nor they had any real reason to, the developers still managed to add a few key features which help this game stand out from the rest of them.

We had the chance to carefully test the beta version of the game, but despite what its name may suggest it was pretty much considered as the actual full game release, as each of the new feature was already fully incorporated. 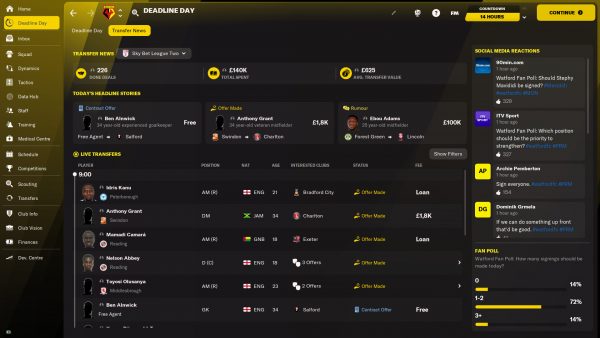 What’s probably the biggest revolution of this year’s edition is the amount of data that every coach has at their own disposal. Your staff is, like always, ready to help you out in understanding the good and the bad of your team, giving you every little piece of advice possible to make sure you always have the perfect solution to win your matches.

Another cool new feature was added for the 3 defenders tactic, allowing you to choose a new exclusive role, the Wide-centre back. That basically means that there will be players better suited for certain formations compared to others. It’s a really cool addition as it makes building your teams more realistic and adds a nice depth to it.

Speaking of which, the football matches themselves are now better to watch thanks to a new engine, which allows coaches to enjoy more realistic movements of the players in the field. The VAR system was also refined as well. When it was first introduced, its only purpose was basically to let you know whenever a goal was being removed or a penalty was being assigned, while in Football Manager 2022 it also serves to add that bit of tension, as you never know for sure whether or not it’s gonna be in your favor. 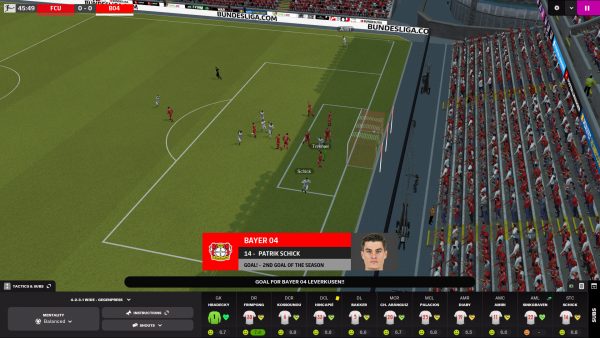 Sports Interactive also reworked almost entirely how the last day of the market transfer sessions works. Not only you get way more information and depth about what’s going on, but agents will also feel free to directly contact you to let you know which players are willing to join your team, giving you the pressure to decide whether or not you should try aiming for a great deal to strengthen your team.

In general, after completing an entire year promoting a team from the Italian Serie B to Serie A, we think that Football Manager 2022 has tried really hard to let the player be even more in control of everything, while also allowing them to more easily relegate certain managing aspects to their staff, but still possessing enough information to never being left out of the loop with whatever will go on with their team.

More often than not, certain players will also start complaining a lot more if they feel like they’re being mistreated, and if you’re not able to handle the conflict well it may also have a negative effect on the other members of your team, which will decide whether or not they agree with your decision, sometimes even pressuring you to let the unhappy players go their separate way. 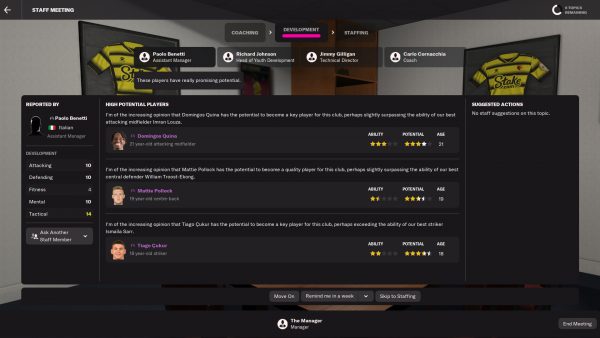 What we feel needs more work instead is the amount of injuries you can get. While it was always a problem of the previous years’ editions, we feel like Football Manager 2022 amplified that even more. At a certain point, we witnessed all the players in a certain role get injured immediately after replacing the previous one, and it didn’t happen just a single time. On one hand, it’s good to have a challenge to encourage players to have a more diverse team, but at the same time we feel like it becomes completely unrealistic, especially when it’s only players in a certain role that keep being injured.

If you’ve loved previous iterations of Football Manager 2021, you’ll most definitely like the 2022 edition as well. It has everything fans could hope for and more. If you haven’t had a chance to try out the series yet, and you’re a huge football fan, it’s definitely worth checking out, especially if you have an active Xbox Game Pass subscriptions. After making sure you have enough time at your disposal, as it can become greatly addicting, you may find yourself engaged deeper and deeper in the game, to the point where you feel like an actual coach.