The Brook Wingman Converter enables you to use your peripherie cross-platform. We tested Wingman XB (Xbox), XE (PlayStation) and NS (Nintendo Switch) in-depth.

The converters are available in three different versions: Wingman XB (black/green) supports Xbox consoles (360, XB1, XSX|S), while Wingman XE (pink) was designed for PlayStation consoles (PS3, PS4, PS5) and Wingman NS (black/red) for Nintendo Switch. These converters let you connect controllers to your PC as X-Input devices. In our review we solely concentrate on console compatibility though. 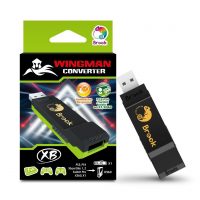 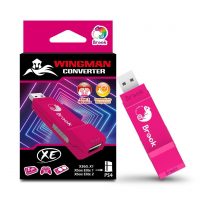 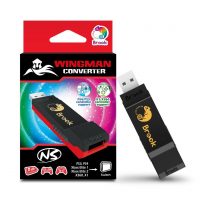 These USB sticks are equipped with a USB A-slot and Bluetooth support which can be enabled by buttons placed on either side of the device. Brook lists the supported devices on the product pages of Wingman XB, Wingman XE and Wingman NS. We tested a variety of peripherie with each converter while using the current firmware. We didn’t test the converters with controllers that the console supports natively, e.g. a Nintendo Switch Pro Controller with a Wingman NS.

Compatible on PS5 with PS4 games including rumble:

No compatibility could be established with a Nintendo Wii U Pro Controller.

Wingman XE is currently not supported in PS5 games since only a DualSense can be used in such games.

According to reports Wingman XE supports DualSense and DualShock 4 controllers on PlayStations 3. As we only tested the device with PS5, we can’t confirm these reports.

Compatible on Nintendo Switch with Switch games including rumble in TV/docked- and handheld/mobile modes:

No compatibility could be established with a snakebyte Switch GAMEPAD S PRO (Nintendo Switch) and a Nintendo Wii U Pro Controller. 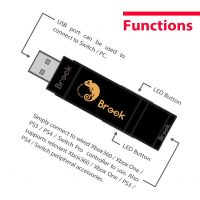 After updating the firmware briefly on a PC, the Wingman Converter are a Plug & Play-solution to use a variety controllers on your different home consoles. Consoles recognize the Wingman as USB-controller. One converter can connect to one controller. Peripherie is charged while being connected to a Wingman converter via its USB-A-slot. The converter can be used in flexible ways such as Switch’s handheld mode in combination with a standard USB-C-to-USB-A-converter (sold seperately). Combine that with Switch’s new support for Bluetooth Audio and you can play The Legend of Zelda: Breath of the Wild with a DualSense on-the-go without much hassle and cables – apart from the two USB devices.

Wingman Converter series supports next to conventional controllers the Guitar Hero and DJ Hero controllers as well as many fighting sticks. We strongly recommend you to check the aforementioned compatibility lists to ensure your favored device is supported before making any purchase. While we couldn’t use every third-party-controller with the Wingman converts, especially on Xbox a lot of third-party-controllers are supported.

We tested a PS3 Wireless Fighting Stick on our Xbox Series S while playing some good old fashioned Ultimate Marvel vs Capcom 3, specifically the Tekken 6 edition made by HORI. Although the compatibility list only mentioned the Xbox 360 version, we can confirm that its PlayStation counterpart works without any issue. There’s basically no input delay and every button works exactly as you would expect from an official Xbox Fighting Stick, which makes this adapter a perfect solution to keep using these controllers on your new console. All you need to do is plug in the USB port the wireless receiver and you’re good to go. The console will recognize it as if it was a third party controller, letting you use it in any game you want. We also tested the Wingman Converter for Xbox with the Nintendo Switch Pro Controller, which makes sense since it already looks very similar to the official Xbox controllers, despite having different labels for its buttons. So similar in fact that, when plugged in your console using the adapter, the Xbox will think it’s an official controller and it will ask you to update them, which we obviously recommend not to do. Besides that, the controller works perfectly and even supports the rumble feature, making this a perfect solution for a secondary controller. We tested it on Streets of Rage 4 and Hades, two very fast-paced action games and, once again, we didn’t experience any sort of issues or delay. Using the Switch Pro Controller, the buttons will be repurposed to actually make it function like an Xbox controller would, meaning B becomes A, Y becomes X and so on. To set it up, just use your USB-C to USB-A cable to link it to the converter, then you can choose yourself to either leave it wired or go wireless. 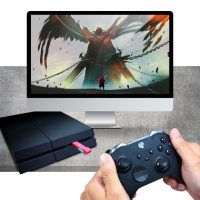 Oftentimes controller converters provide a lot of delay to the user experience making it impossible for usage in fast-paced games. We tested each Wingman converter with a variety of shoot’em-ups, racing, rhythm and fighting games and found no noticeable latency in comparison with natively supported controllers of each console, no matter if we connected the input device via USB or Bluetooth. Speaking of Bluetooth: Thankfully the Wingman memorizes the last Bluetooth device you paired it with. Once you turn on your DualSense that you previously paired with your Switch, you can be sure it won’t boot up your PS5. There are still some downsides to the converters: Currently headphones connected to the 3,5mm-slot of a standard Xbox or PlayStation controller aren’t supported. If you want to join Party Chat while using the converter, you’ll need an additional native controller or a USB-powered headset. While it is neat that rumble is supported, it’s nowhere near the effect generated on native controllers. The inexplicably extravagant design of the Wingman XE will most likely lead you to hide it on a USB-port on the backside of your console.

Wingman Converter series enables controller compatibility cross-gen and cross-platform. They’re quick to set up and can be used in a variety of combinations though compatibility with third-party-devices and headset-support should be considered for future firmware updates. Wingman XB, Wingman XE and Wingman NS are currently available for roughly 45 Euro or your regional equivalent.

Brook provided us with the Wingman Converter series for the purpose of this review. This review was written by Francesco and Patrick.