The 25th Detective Conan movie The Bride of Halloween will hit cinemas throughout Europe this month. Find out in our review if you should get a ticket.

“Happy Halloween!!”, we’d say- but we’re at the beginning of May, far away from anything close to Halloween besides cosplay. Thankfully, our 25th – yeah, you read that right – 25th Detective Conan/Case Closed movie is here to give you a bit of that excitement back. With a colorful bang and it’s underlying Halloween theme!

There is a Tl:dr section right at the end, for those who have little time or patience to read through a detailed evaluation and some additional info. Thus, without further ado, let’s get into the review of Detective Conan: The Bride of Halloween. 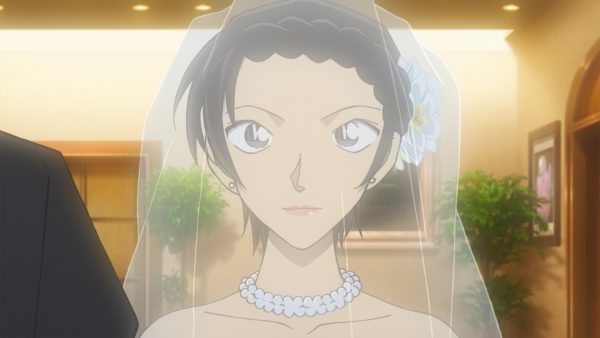 The movie starts up with a myriad of information that is not quite necessary for the movie itself but gives you the roundabout what had happened until then – at least until the Detective Boys (and Ai Haibara/Shiho) break up the usual spiel of Conan to get the actual movie started.
If you’re not familiar with the franchise, the aforementioned names won’t mean much to you. So, try to not get yourself confused by the sheer mass of different names and locations they fire at you from the start. The really important ones get several mentions while the movie is running, and the characters look distinct enough to stay in the loop. The rest can be considered as framework.

The Plot:
The movie is off to a hot start. After the explanations we zap not only to a wedding preparation attended by our little detective, but also to a scene where two men chase after a criminal that escaped prison. These two are National Police Agency Security Bureau Investigator Amuro Tooru and Kazami Yuya of the Tokyo Metropolitan Police Department Public Security Bureau.

While trying to detain him, said criminal goes up in flames and Amuro, naturally trying to save his colleague who’s unconscious and nearly falls down a ledge, gets a weirdly designed collar strapped on with two very distinct colored fluids in it. Separately they do nothing but together, they would leave quite a dent in a person, as we’ve seen in the scene before. Amuro being unable to look into the case himself, due to the foreign collar around his neck now contacts none other than Conan, who has dabbled with the Investigator and his different aliases time and time again. And that is basically the premise of the story. A mysterious killer is once again on the loose, with a device and possibilities that could cause quite the impact on Shibuya’s Halloween celebrations. 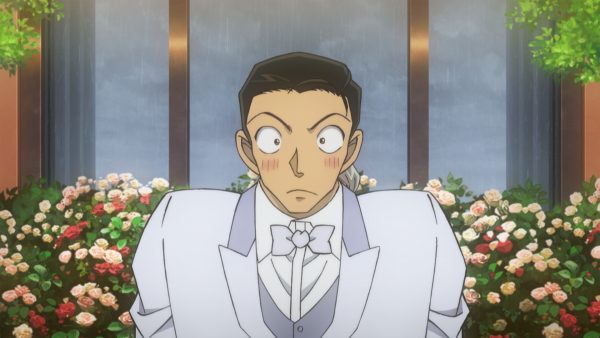 The movies’ screenwriter is yet again Okura Takahiro, who is well known for this detective drama writing and he also worked on the scripts for Conan’s 21st and 23rd movie as well as several episodes in the actual series.

Those who know Case Closed as an anime, manga or the movies may already know where this is going. The episodes themselves are fairly formulaic, even for a detective story. So is the movie. Once you’ve read/seen a few, you may be already be able to guess who is behind this with relative ease by the middle of the material. Back in the day when Conan started, the “suspicious” person was always blacked out, a shadow figure with eyes, but there is no need for this in the movie or recent parts of the series. So, the viewer gets quite a lot of hints of what to expect from certain characters, should they be observant enough.

While some may get the thrill of wanting to know who the killer is, the other side of that coin will be entertained with the thought: “I wonder how they’ll catch YXZ.” Though, a third party may wonder: “Who would use bright pink and neon blue colored liquid for a bomb anyway and make the two visually distinct liquids always very visible at that?”

To make the whole movie appealing for nearly every age the color pallet is bright, even in night scenes, and the individual pieces of a scene stand out. While back then Detective Conan was known for using muddy colors, that changed over time, slowly but surely, and this movie is no exception, especially with the current theme revolving around a bomb. 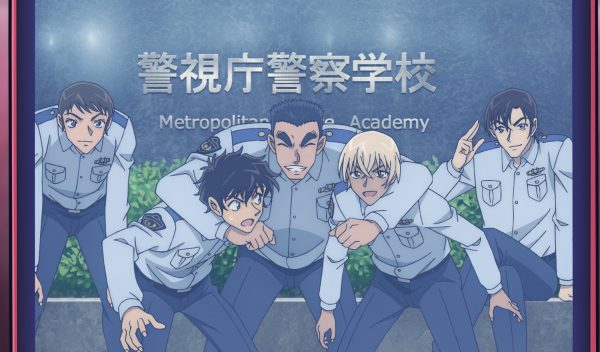 Around 80-90% of the movie is 2D-animated, the other percentages consist of 3D CG animations that sadly stand out quite a lot. But in this day and age this is nothing new, especially in scenes with extreme crowd density or moving camera angles and fast-paced action. Yet, the animation team managed to make the most of every scene and detail.

Most scenes are tightly focused on the people where the action is actually happening, but that does not mean that the compositions are boring. Every background and scene is brim packed with intricacies. Even the people who do not share the spotlight with the main cast have their own things to do and conversations to make. The studio and planning made sure that every scene and angle looks immersive and realistic enough to be believable. They make use of different camera angles and scene-skipping to craftily get around building layouts. 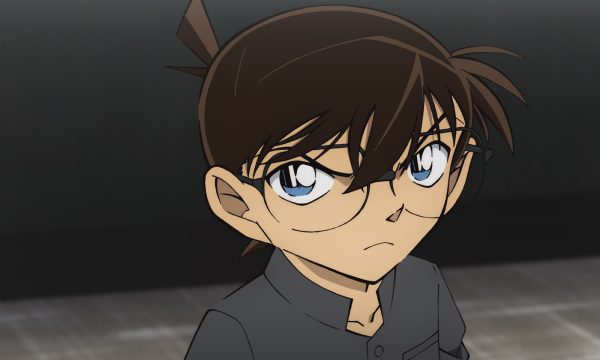 The soundtrack sports remixed themes, many silent moments to build up tension and the movie also makes good use of proximity sound effects. Though sometimes the sound mixing seems a bit off, here and there, where it’s more difficult to understand certain individuals, especially in the beginning of the movie, and when music plays in the background. This is at least the case for the original Japanese version.

And our Japanese voice actors return for this one once more, which is a nice touch in such an extremely long running series. And they give it all, even after decades of working on the whole project. Sometimes they may seem over-dramatic, but this is “Case Closed” we are talking about, drama is part of the game or movie in this case, even to an overly amusing degree.

Regarding the subtitles, we can’t say much about the English ones at this point in time, but the German ones were mostly satisfactory with only some minor errors in them due to the pacing and nature of the movie and scenes since some titles, terms and concepts are much different in Japan than they are in Germany or the US/England. 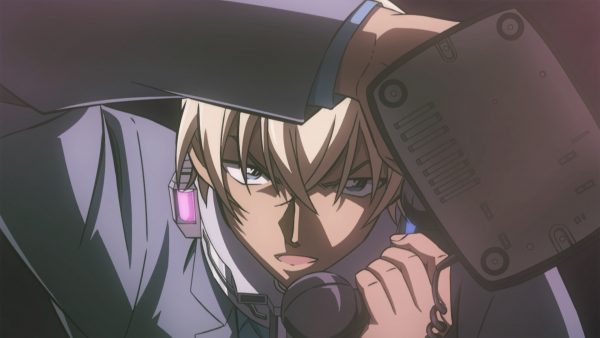 The movie finishes with a bombastic finale and lots of close quarter combat fights, and the usual crafty Conan & Dr Agasa’s inventions. Though the last gimmick to halt the deadly ploy of the firey adversary may seem a bit ridiculous, Case Closed: The Halloween Bride is a fun composition made for die-hard fans and naturally interested people alike. Though, it may fall a bit short of reaching out to the more skeptical or the more observant audience. It does sport enough gimmicks and Easter eggs as well as returning characters for those who simply fell in love with the world and said individuals, though.

If the codename SHERRY rings any bells, you’ll recognize right after the credits a surprisingly long teaser for Case Closed’s 26th movie in 2023.

Should you give the movie a go? That – as always – entirely depends on your preferences and tolerances towards the genre.

– Are you into the world of Detective Conan/Case Closed?
– Already love the cast or the characters (especially Bourbon) and are simply unsure if you should give this a whirl?
– Or are you at least interested in it, but taken aback by the sheer volume of Case Closed as a whole?
– Are you interested in detective drama?
– Do you want a distraction or something fresh, flashy and new to look at that is a bit on the lighter detective side?
– Don’t mind some open-ended plot devices or loopholes?
– Miss some well-paced action-packed fights and/or some ridiculous James Bond-like gimmicks to smirk about without having to think too much about the premise?
– Are you not opposed to … flamboyant deaths and blood?
For those who simply want to avoid having Kogoro around, a small spoiler: He does not have an important role in this movie and stays mostly silent, but not due to the usual sleeping variety.

If you can even answer one or two of those questions with a “Yes” then we would recommend you give the movie a go since it is an entertaining piece in itself. And due to all the work that went into the Halloween Bride those two hours should go by pretty fast thanks to the good pacing and dynamic of this movie.

Kazé provided us with a screener of Conan: The Halloween Bride for review purposes.