Silt is a new 2D puzzle game with a black and white color scheme and horror-like underwater settings, in which you control sea creatures to move forward.

Silt has definitely one of the most unique presentations in the gaming market of these last years. Its aesthetic is in fact very unique, being an entirely black and white game based in a horror-like setting. It wouldn’t be wrong to compare its style to Limbo, which of course has proven to be a huge hit in the indie marketplace. Despite this being the first game made by Spiral Circus Games, the concept of Silt proved to have a lot of potential to become a hidden gem. After having the opportunity to play it on Xbox Series S before its June 1st release date, we’re ready to tell you more in detail about what to expect from this fascinating adventure. 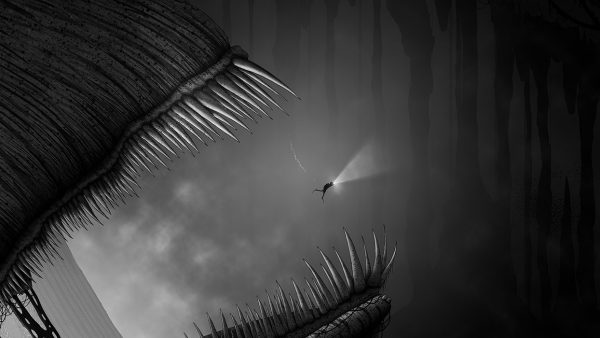 Despite its grotesque designs of the underworld, we should be clear from the start that Silt shouldn’t be considered a true horror game. Its real nature is that of a 2D puzzle game in which you control a diver with a supernatural ability – the power to transfer his souls into sea creatures to temporarily control them. This will be effectively your way of solving puzzles. Almost every fish in the sea will have a specific purpose that will help you move forward to your next objective.

For example, you can use the sharp teeth of piranhas to help you cut through certain strings, use the hammerhead fish to force your way through cracked walls, use eels to generate electricity and so on. This all results in a series of clever ways in which you have to figure out exactly what you have to do to overcome an obstacle, while also succeeding at being simple to figure out in a few attempts. Of course, having this ability doesn’t mean that we are allowed to be reckless since, after all, we are leaving our own body temporarily behind to control one of the sea creatures. This means that if we’re not careful enough, we may end up dying as a result of other fish attacks, so it is extremely important to ensure that we are in a safe position after transferring our soul. 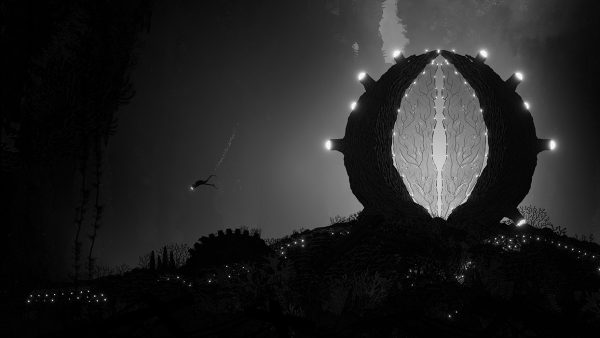 Thankfully our power has a long enough range that allows us to be careful and, once we’re done controlling a fish, we can always return to being a diver instantly by pushing a single button. Certain puzzles may require a trial-and-error approach but since we have unlimited lives we won’t have to worry about death. The only minor setback is that every time we die we’ll just end up back at the beginning of a certain puzzle. It is certainly an engaging experience, although a very short one. We managed to complete the entire game in about 4 hours but, if you’re particularly fast, it could also be easily over in 3 hours.

As we mentioned in the beginning of this review, the art style is definitely the most fascinating aspect of this production, which also serves as a way to narrate the lore surrounding the mysterious underwater sea we’re exploring, although honestly we weren’t quite sure about what the plot was trying to tell us as it doesn’t really explain anything that happens. Even so, it’s certainly an intriguing experience that we’re certain is gonna spawn some theories online about what we just witnessed. 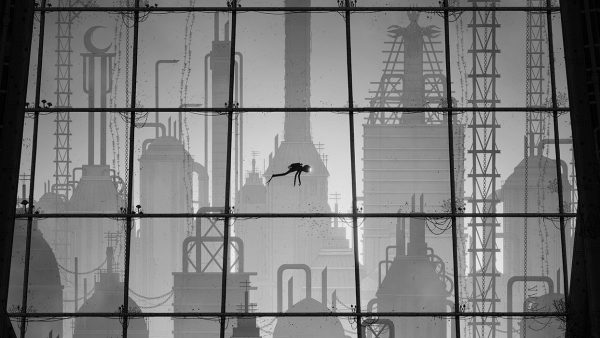 Silt has certainly proven to be a surprisingly fun game that, despite one or two particularly annoying puzzles to traverse, it’s simple with a lot of potential gameplay ideas. Unfortunately, the short nature of the game means we didn’t really get to see them in action as much as we wanted to. Boss fights, for example, were really disappointing for the most part and only relied on us doing a specific gimmick with other sea creatures to manage a victory. But the fact we wanted to see more speaks for itself about the good ideas Silt had going on. So if you’re looking for a short but original experience and you like horror-like settings, it’s definitely worth checking it out. Silt is available now for Xbox Series X|S, Xbox One, PS5, PS4, Switch and PC.