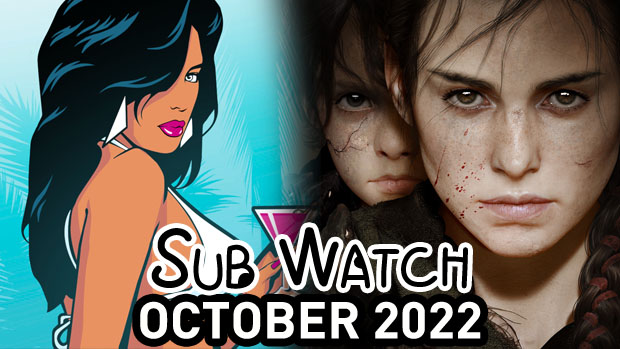 Our monthly update on new games being added to PlayStation Plus, Xbox Game Pass, Nintendo Switch Online and other subscription services returns.

It’s easy to lose track of new games being added to the countless subscription services. Catch the latest titles in the short video below.

Check out which games we’ve been playing lately. These games are either part of a subscription services at the time this articles gets published or were made available recently.

This week Tommy Vercetti (Ray Liotta) is celebrating his 20-year anniversary in Vice City. GTA: Vice City was released on October 29th, 2022 for PlayStation 2. On November 11th of last year Rockstar Games published GTA: The Trilogy – Definitive Edition, reworked HD remasters of GTA III, GTA: Vice City and GTA: San Andreas for current- and last-gen systems. The feedback has generally been bad due to countless bugs and a change in graphics style compared to the original release. Developer Grove Street Games has worked and published several updates since release and we have played through the entirety of the PS5 version of GTA: Vice City – The Definitive Edition which has been available for PlayStation Plus Extra and Premium subscribers since October 18th, 2022. Our impressions are mixed.

While story, game world and mission design haven’t been touched, the game’s resolution and frame rate was increased to 1440p/60 FPS (performance mode) and 4K/30 FPS (quality mode), a few songs have been removed due to expired licences and the controls have been modernized. It’s up to your preference if you’re in favor of the generally more comic-like visual style of the Definitive Edition in comparison to the original. We didn’t find any unproportional character models which are very apparent in the GTA: San Andreas remaster which was removed from Xbox Game Pass in May. Draw distance was considerably improved and the PS2 fog almost gone entirely. The game looks much cleaner on PS5 compared to the PS2 version. In performance mode the game stays locked in 60 FPS for the most part with some dips in gun fights with a lot of characters and vehicles displayed. We couldn’t find the game making use of the DualSense’s haptic feedback and adaptive triggers. Vehicles control a lot smoother in the Definitive Edition in comparison to the 2002 release and combat is a lot less frustrating due to auto aim. In rain or hectic situations such as the conclusion of the game it’s an entirely different situation since vehicles become unresponsive and the auto-aim turns out to be too sluggish. The new GPS system with custom waypoints makes sure you won’t get lost in Vice City. This feature turns out to be more useful in the bigger map of GTA: San Andreas.

GTA: Vice City – The Definitive Edition and the other remasters included in the trilogy being based on the mobile versions lowered our expectations to the technical qualities. Nevertheless this new version lets you enjoy the incredible performances of the recently deceased Ray Liotta as well as actors like Tom Sizemore, Luis Guzman, William Fichtner, Dennis Hopper and Burt Reynolds on contemporary systems. Just make sure you know what you’re getting into. If you’re used to GTA V (2013) controls you’ll have to adjust quite a bit and may want to wait for GTA VI for a hopefully technically more contemporary version of Vice City.

Stray (included in PlayStation Plus Extra and Premium) (Patrick)

Stray was released on July 19th, 2022 and social media was full of even more cat videos. While the game’s intro let’s you interact with a lot of other cats and is presented in a linear cineastic form, the actual game let’s you roam different districts of an abandoned city which is populated by robot while you’re finding out what happened to this ghost town and what’s outside the city. While the missions are mostly fetch quests, the developers throw some environmental puzzles, quizzes, stealth segments and even combat into the mix. Your furry protagonist is supported by their trusty drone B-12 which is able to hack and fight. The game’s focus lies on exploring ever so detailed districts such as slums, sewers and a prison.

The game’s second protagonist is the cyberpunkish city. It’s a joy to explore the different areas and meet a distinct cast of characters. Thanks to unlocking memories and collecting energy drinks and song book pages you won’t be done after finishing the story in 5 to 7 hours. The game’s score by Yann Van Der Cruyssen is noteworthy and makes you feel for the fate of the characters. If you like puzzling and interesting narratives, you should give Stray a go on PS+ Extra and Premium.

Immortality is a FMV (Full Motion Video) game written by Sam Barlow (Her Story, Telling Lies) released on August 30th, 2022 in Xbox Game Pass and PC Game Pass. In Immortality you’ll have to find out what happened to the actress Marissa Marcel (Manon Gage). The game consits of the three ficitonal movies Ambrosio (1968), Minsky (1972) and Two of Everything (1999).

In the game you’ll unlock movie cips in seemingly random order. You’re able to fast forward, rewind, slow down and pause each clip. Immortality’s unique feature is your ability to click on almost any item or character to unlock new clips. Each movie feels very believable due to the performances by the actresses and actors such as the lead Manon Gage, Charlotta Mohlin, Ty Molbak and Hans Christopher, the fantastic set design and wonderful costumes supported by excellent cuts, a supportive score and change in sceneries. You’ll have to use the game’s mechanics to reveal the dark secret lying beneath. Depending on your input device – mouse and keyboard or controller -, you’ll have to use different senses. Don’t worry, we won’t take away the game’s twists.

Immortality may not be for everyone but once the game literally clicks with you, you won’t mind going through the dozens of clips all of which you don’t have to unlock to see the game’s ending. Then you’ll be sucked into a different kind of reality due to the intuitive game mechanic, the elaborate period pieces and the fantastic presentation.