New real-time dungeon crawler releases are few and far between, and a title trying to blend that style of gameplay with survival elements is even more irregular. Zanki Zero: Last Beginning attempts to do this and more, but makes quite a few missteps along the way. 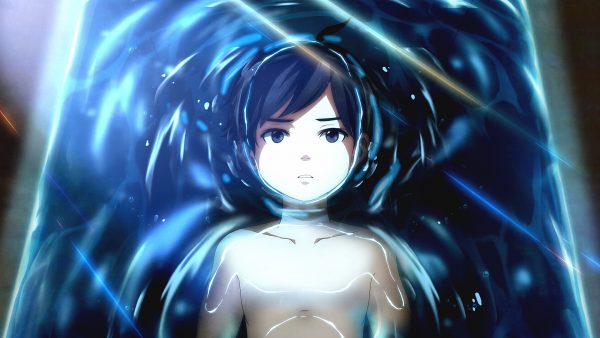 After magazine editor Haruto seemingly jumps off a building to his death, he wakes up on an unfamiliar beach. As it turns out, aside from him and 7 others, humanity has been wiped out leaving only ruins of what used to be. He discovers that all of them are human clones, each having an x shaped device implanted on their stomachs, and they age far quicker than normal humans. None of the survivors have any memories of what happened to the world, and the only thing they have to guide them is a strange cartoon that directs them to the ruins that drift through the sea.

Zanki Zero’s characters are by far the strongest part of the game, giving us a diverse cast of misfits that each have their own personalities and quirks. If you’ve played any of the Danganronpa games (produced by the same director) then you’ll likely already be familiar with the way characters are handled in this game. Unlike Danganronpa you’ll actually be spending a lot more time with the entire cast, since this about survival instead of killing.

Most characters have their backstories handled in a similar way; the ruins that appear each chapter are tied to one of the survivors, and while exploring them you’ll often run into TVs that show you that character’s past in the form of ‘conquest videos’. The problem with this is the way the game presents each look at their backstory, mainly the cartoon that is used to introduce each video. Extend TV is a goofy cartoon with a pair of characters that joke around and make references to other media and pop culture. This, combined with the visual style used for each video, really takes away from the serious subject matter being presented.

Thankfully this doesn’t detract too much from the rest of the story, and itt’s great to see the characters overcome each of their troubled pasts. This is all further helped by Zanki Zero’s fantastic English dub, offering some of the best English voice acting we’ve heard in a dubbed game for a long time. There can be a lack of voice acting at times though, mainly due to the ageing system requiring each line to be voiced multiple times, which can detract from some important scenes. 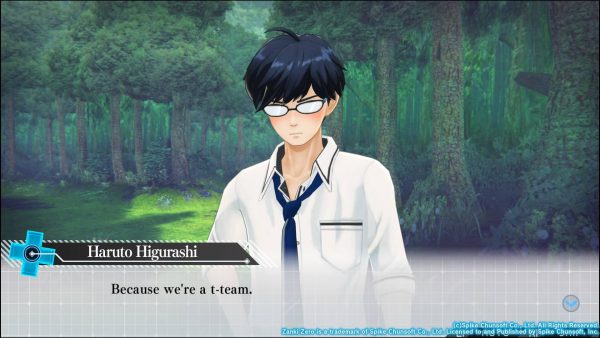 Dungeon crawling makes up the majority of Zanki Zero, and is where many of the game’s issues crop up. Your main party is made up of four characters, with the remaining 4 being available at all times to hold items or switch into the party. Movement is grid based and works as you’d expect in a DRPG, though you do have access to sprinting which speeds up exploration. Each character in your party can attack with their held weapon, with a small cool-down before they can attack again. Again, standard stuff for a turn-based DRPG, but there are at least a couple of attempts to spice things up.

Holding down the attack button will give you access to a progressively more powerful charge attack, with more party members joining in with the final attack depending on how long you charge it. If you release and then re-press the attack button when the charge meter reaches a certain point, you’ll quickly be able to use the full party charge attack. This attack not only does more damage than regular hits, but can also break parts of specific enemies to gain extra items. This system is usually most important during boss fights where you can disable their attacks by breaking parts, along with gaining access to new clione. Clione acts as the special moves or spells of Zanki Zero, giving characters that equip them new attacks or support abilities. Both of these systems do make dungeon crawling slightly more enjoyable, but it often just means that you’ll be spamming charge attacking instead of regular ones which is still not very engaging. 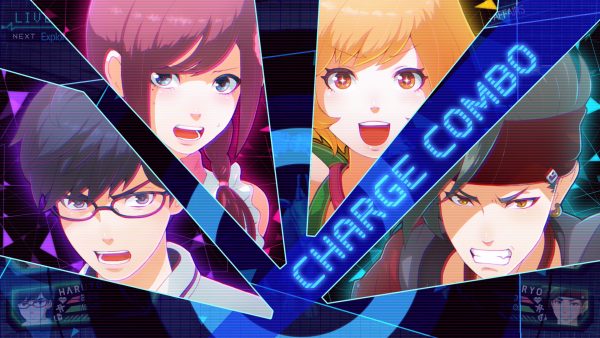 As for the ruins, they’re pretty good overall, offering a decent number of puzzles and gimmicks unique to each area. Zanki Zero can rely on item and button–based puzzles a little too much at time, but even these offer up a decent change of pace from the combat system. It would have been nice if there were a few extra ruins that weren’t related to the main characters, maybe as a way to add in more story events between the main areas, but that’s far from this game’s biggest problem.

We mentioned during the story that the main cast can only live for a short amount of time before they die and have to be cloned again. Well, this and the survival elements in Zanki Zero really detract from the dungeon crawling gameplay. Firstly, each character has a set of stamina, stress and bladder meters that must be looked after at all times. This means taking food with you and items that can reduce stress. The problem is that unless you’re playing on one of the easiest difficulty settings, stamina will drain incredibly quickly. This means eating food, which in turn means each character’s bladder meter will fill up. Even eating food can be somewhat finicky due to the inventory system, requiring you to select food and then move it over to each character’s portrait. These survival systems just feel like a chore after the first few ruins, though on their own they wouldn’t have been a deal-breaker. 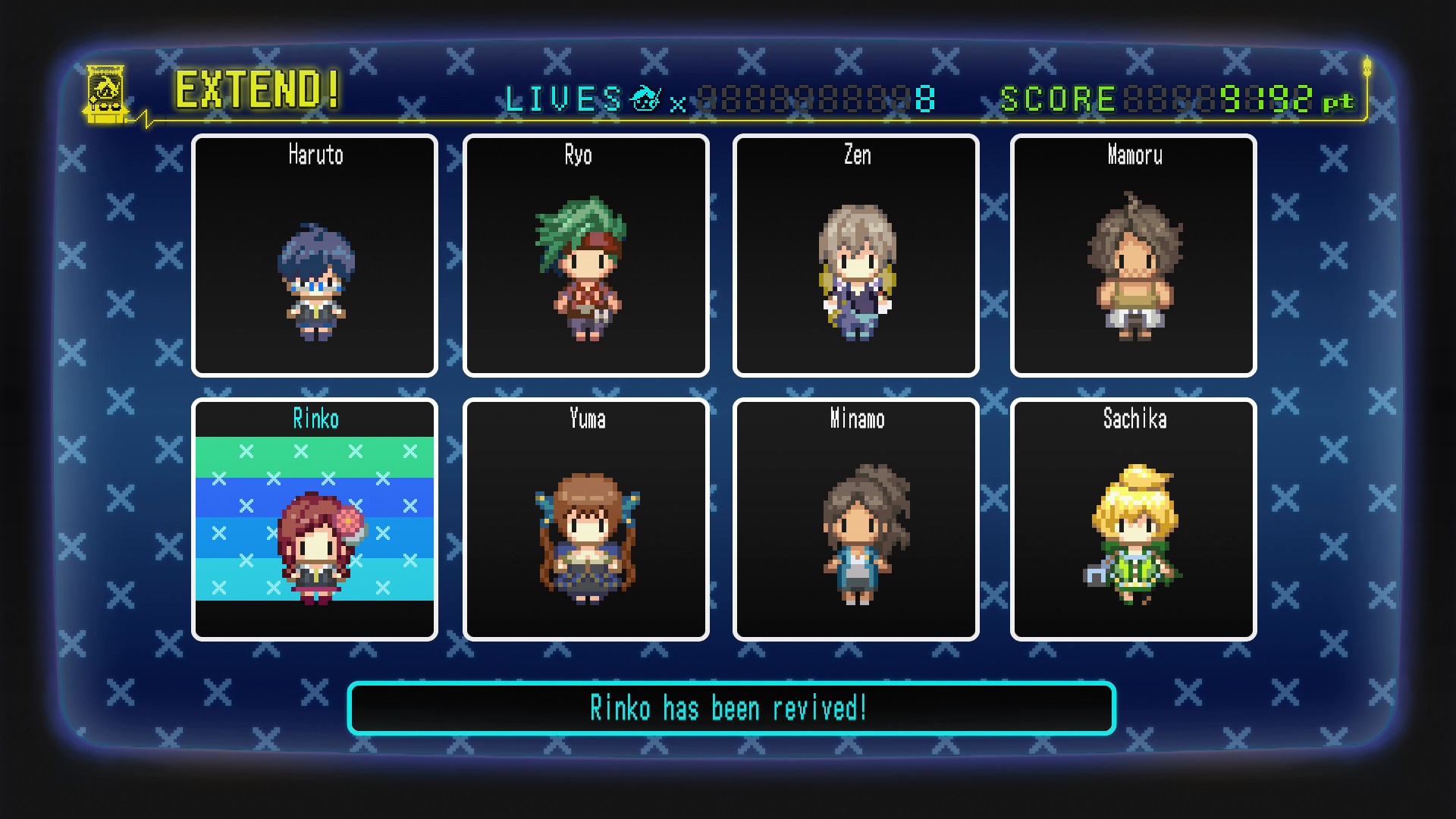 Ageing and the cloning system is what really makes dungeon crawling annoying, due to how time moves while exploring ruins. From what we could tell, spending a certain amount of time on a particular floor in a ruin will cause a day to pass when you move to a different floor. With clones only being able to live for 13 days at the start of Zanki Zero, and dungeons being at least 5 floors long, this means that you’ll inevitably have characters die even if they aren’t killed by an enemy or trap. Dead characters drop all their items, and can only be cloned when back at Garage Island. This means backtracking, which will likely end up making other characters age even further, or taking a point penalty. Points are what you need to clone characters, and can depleted pretty quickly early on if enough characters die.

So, between cloning characters and gathering items you’ll end up having to make constant trips to and from Garage Island. Backtracking can already be annoying in DRPGs when you’re stuck on a specific puzzle or fall into a pit, so these extra interruptions are even less welcome. Depending on how a character dies, they’ll gain certain benefits when cloned, but many of these bonuses don’t have much impact considering how awkward it is to bring them back to life. Without the ageing mechanic, the cloning system wouldn’t have been too bad – it would just be a slightly quirky way of reviving characters with slight bonuses here and there – but having characters die no matter what you do just grinds gameplay to a halt at times. 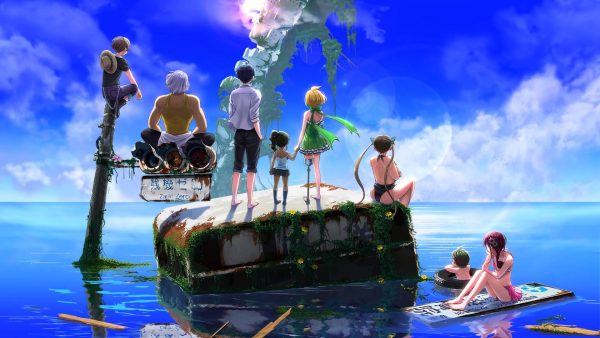 Zanki Zero fails to blend DRPG and survival mechanics together in any meaningful way, though strong characterisation makes up for some of its shortcomings. Fans of the Danganronpa series will likely find some enjoyment in Zanki Zero, but this is not a game for those craving a good DRPG.