Earth Defense Force has always been my go-to series when I just want to chill out and have fun. It’s always fun just to shoot alien bugs for a hour or two, and each game never takes itself too seriously. Iron Rain attempts to take what is usually a goofy and energetic series and turn it into something more serious and, dare I say it, ‘westernized’. 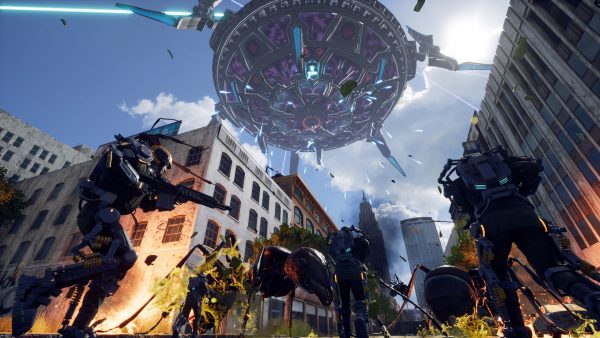 This isn’t the first time the series has been handled by a different developer, with 2011’s EDF: Insect Armageddon being received poorly by fans. For this second try at creating a different take on the EDF series, Yuke’s – a developer mostly known for wrestling games – was chosen to hopefully avoid the mistakes made last time. Iron Rain does at least make a decent first impression, opening with a giant alien mother ship attacking earth. After your character manages to destroy the ship, they’re crushed its debris, leaving them in a coma for 7 years. This is where the main story begins, and you can customise your character’s appearance and clothing, a new feature to the series (aside from some basic colour choices in certain EDF games).

Also new to the EDF franchise are cutscenes, the main games using dialogue during missions to tell the story instead. These were likely added due to the more serious tone of the story, which does away with most of the goofy charm of the previous entries. There are also far more named characters here instead of nameless soldiers or higher ranking EDF members, though due to the change in tone it’s hard to really care about any of them. That applies to most of the story too, the lack of humorous self-aware banter between characters leading to missions that feel generic instead of fun.

Attempting to make the game more serious than the mainline EDF games has also led to some unfortunate changes in gameplay too. At first glance Iron Rain may look like previous game, with the same third person alien shooting action, but a lot has been tweaked or removed. For starters, the four classes – called PA-Gear in Iron Rain – all suffer from some of the design choices made elsewhere. The trooper is a basic no-frills class, with reasonable defence and a short dash that can be used multiple times. Jet lifter can fly around for a limited amount of time, heavy striker is bulky but can take and deal a lot of damage, and the prowl rider can grapple around and ride on monsters.

Sounds like a decent selection of classes on paper, but while playing they all have issues to varying degrees. There are no class specific weapons, and vehicles can be used by all classes. The trooper has the highest capacity for taking items and vehicles into battle, but since these use up credits – the currency needed to buy armour and weapons – there’s no reason to use this class unless playing on the hardest difficulties where money isn’t an issue. Jet lifter has a limited amount of energy that they use to fly, and there’s no way to increase it. Heavy striker is the best new class in Iron Rain, but is still not as interesting as it’s equivalent in EDF 5, the lancer. Finally, prowl rider’s concept is cool, but without items you can’t even ride on a monster for long during most missions.

The tradition EDF weapon and armour system, where you’d gain weapons and upgrade armour by collecting boxes dropped by enemies, has instead been replaced by the aforementioned credits. Missions reward credits upon completion and unlock new weapons in the shop, while enemies drop different coloured gems depending on their type. Instead of having to rely on RNG, you can buy the weapons you want with credits and gems. Unlike the rather poor classes, this new weapon system is not too bad overall. It removes the annoying grind for armour that was mostly present in earlier EDF games, and you’re guaranteed to get a specific weapon without having to grind specific missions. There are still a couple of problems though. Upgrading armour means that you’ll have less credits for new weapons and vice versa. This is mainly an issue when you happen to buy a bad weapon, and there’s no way to test out a weapon before you buy. 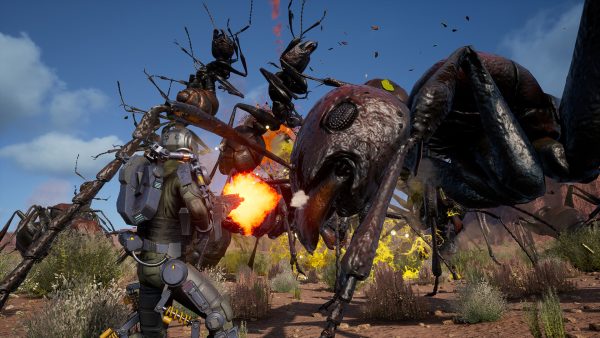 Unfortunately, while unlocking weapons has been streamlined in a good way, the selection of weapons overall has been cut down heavily compared to EDF 5. There are a lot less weapon categories, and each one is filled mainly with slight variations of the same weapons. That’s not to say that previous EDF games didn’t have some boring weapons every now and then, but most of the more interesting weapons are not present here. There are some interesting quirks to weapons, like a Gears of War style reload mechanic or random chances of a bullet doing massive damage, but they never get quite as crazy as the mainline games.

Outside of class and weapon changes, even the basic gameplay has regressed somewhat compared to EDF 5. Guns have less impact when shooting enemies, from weak sound design to enemies not being blown apart by explosions. The robot enemies are the worst for this, barely showing any signs of damage no matter how you attack them.  Iron Rain may have better graphics when it comes to polygon counts and particle effects (even if performance on a base PS4 is still poor like EDF 5), but when it doesn’t feel satisfying to use weapons these improvements feel pointless. The reduced enemy count for most missions does little to help with this sentiment.

Iron Rain’s biggest problem is that it released after EDF 5. If this was released a few years ago, back when EDF 4.1 was the latest entry in the series, it would likely have been easier to ignore some of the game’s flaws. But there’s a reason why we keep mentioning EDF 5: It fixed many of the series’ long-standing problems and made each weapon satisfying to use. It’s hard to really feel excited playing Iron Rain when there’s less content, less enemies and just less fun overall. 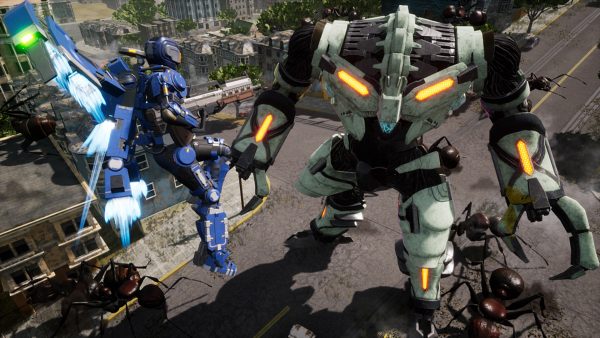 Earth Defense Force: Iron Rain isn’t a terrible game, but it is far from a good entry in the EDF series. Most of the game is toned down in an effort to make the game appear more serious, and there’s far less content than EDF 5, which was released fairly recently in the west. This might be worth a purchase later in the year during sales, but as of right now there is little reason to pick this up over the far superior EDF 5.