Lapis x Labyrinth follows Penny Punching Princess and The Princess Guide as the next Nippon Ichi Software title to offer cutesy but otherwise simplistic gameplay and characters. If you’re familiar with either of those titles it should come as no surprise that this is yet another game that offers a few hours of fun but doesn’t have enough to keep your interest beyond that. 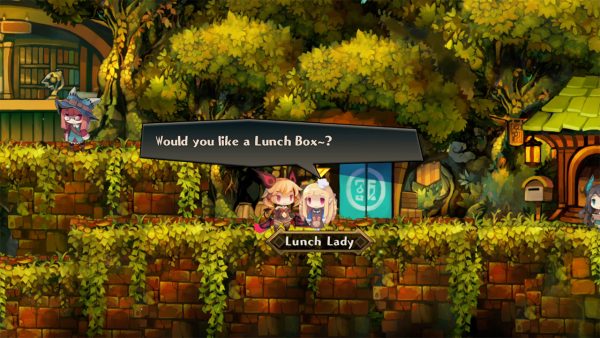 If you’re looking for a grand story with memorable characters, you’ve come to the wrong place. You’re a group of adventurers that arrive in a desolate town looking for treasures that are said to hide below it. The backstory for your adventures in Lapis x Labyrinth is barebones and the story never tries to become anything more than a quick justification for your forays into the titular labyrinth. It’s clear that this game does not want to focus on the overall setting which is fine, but it would have been nice to have more than 10 minutes of story for the entirety of the journey.

Crawling the dungeons underneath the town is a simple task. Your party is made up of 4 characters, who are stacked on top of each other with the bottom-most member being the one that is controlled. Each party member can be one of 8 classes, each with its own set of basic attacks and skills. Attacks are very simple to pull off, using a directional system similar to the Super Smash Bros. series, and each class has a different set of skills to use. You don’t really need to think about correct party compositions either; As long as you have 4 party members, you’ll be able to take on pretty much all content in the game. This does mean that, while you can experiment with different classes, there’s little reason to care about what party members you choose aside from the main one you want to control for most of the game. 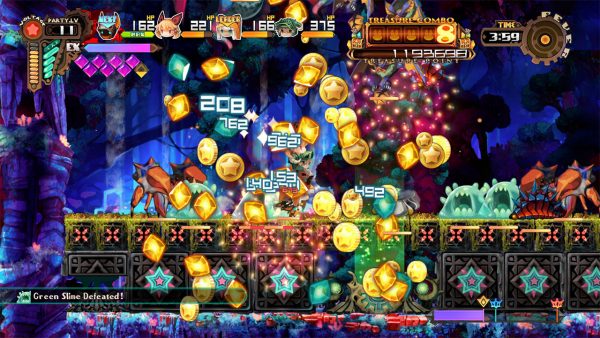 After picking a mission from the quest board, you’ll be tasked with taking on a handful of floors in an area before facing a boss monster. To clear a floor you must break crystals that are scattered around, usually guarded by a group of monsters, and make it to the exit portal. Dispatching enemies is rarely difficult, usually only requiring one or two skills before moving onto the next group, though it does emulate the charm that Warriors games have of letting you destroy hundreds of opponents with ease. Throwing stacked characters to call in assist attacks also adds to the madness on screen and does at least break up the button mashing from time to time. Defeating enough enemies and collecting money will activate fever time, granting invincibility and massive amount of gems that explode out of enemies when you attack them. The energetic theme of this mode combined with the visual spectacle leads to some fun moments, though with how frequently you’ll enter this mode it stops being exciting after a few hours.

Destroying enemies not only gives you access to money and new equipment, but it also leads to some rather crowded encounters when there are a lot of sprites on screen at once. Lapis x Labyrinth’s artstyle is pleasing some of the time, thanks to some cute character sprites and flashy attacks. But the dungeon itself is bland, being made of a few types of platforms and blocks that are placed into various basic layouts. The themes of the dungeons are not particularly varied either, often seeming like little more than a recolour with a different background. The new music for each area does at least give them more of an identity, but even then it can be hard to feel like you’ve made much progress when the floors start to blend together visually. The Switch version of Lapis x Labyrinth also suffers from a few framerate issues. As mentioned earlier this game has some nice sprites and an overall colourful style, but once you’re fighting larger groups of enemies, especially during fever time, the framerate will often slow to a crawl. Playing in docked mode makes these drops less frequent, but it’s still a noticeable problem even in the earlier levels of the game. 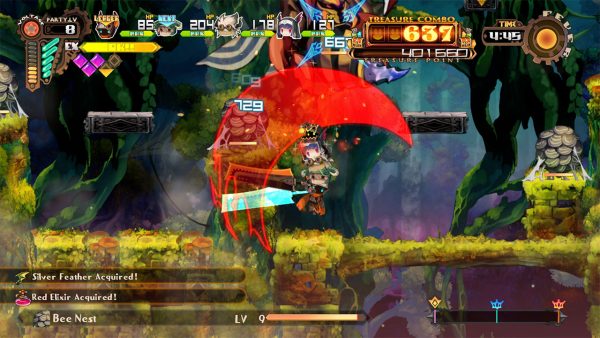 And… that’s it. After completing a few missions, you will have seen the vast majority of content in Lapis x Labyrinth. There are no unlockable moves, and most enemies are just re-coloured and re-skinned. Even the floor layouts end up being repeated constantly, and the rather samey environment themes do little to improve the constant repetition. It’s still fun to blast through waves of enemies while collecting a variety of loot, but by the end of the short main story the charm of the simplistic combat had worn thin. The post-game missions do ramp up the difficulty considerably, but without any actual new content to discover there is little reason to try these unless you really enjoy the gameplay.

This lack of depth is really driven home by the facilities that are unlocked as you clear each area of the labyrinth. Eventually you can upgrade not only the equipment you’re using but the characters themselves as well, both through individual stat increases and items that improve your entire party’s abilities. This is fine on paper, but in reality none of these systems offer anything in the way of interesting customization, since it’s always clear which upgrades you should go for and the rest can be ignored. For example, why would you ever upgrade damage to a specific enemy types when you can just upgrade your base damage instead. There are a lot of different stats and effects tied to weapons, it’s just unfortunate that most of them are bland or simply useless. 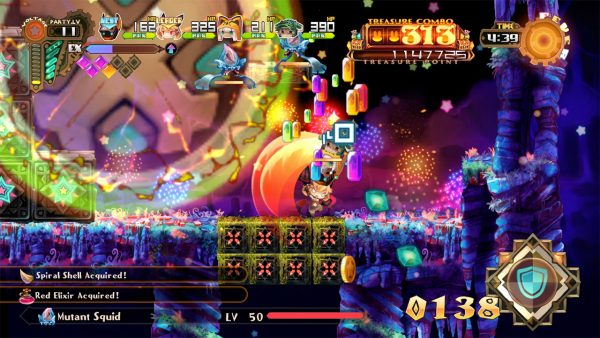 Lapis x Labyrinth isn’t a bad game, it’s just very simplistic and has a hard time keeping your interest for the 10+ hours required to beat it. If this was a cheap £10 or so release, then it wouldn’t be too hard to recommend this to someone looking for a simple action game that can be played for a few minutes at a time. But at its current asking price, there is little reason to pick this up over the many other more interesting, and more substantial, releases this year.