After many years, a lengthy delay and a spin-off game earlier this year, Bloodstained: Ritual of the Night has finally been released. As the spiritual successor to Castlevania, Bloodstained has a lot to live up to and, for the most part, it delivers a solid metroidvania experience. 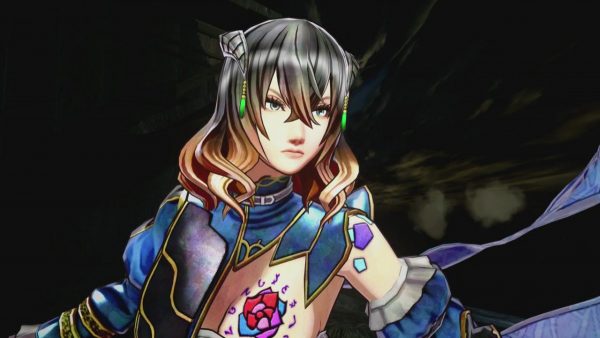 With Bloodstained attempting to emulate the feel of a Castlevania game, it should come as no surprise that the setting would be similar in many ways. Miriam, a woman that has been partly crystallised due to experiments by alchemists, wakes up from a coma to find that the world has been invaded by demons. The source of this invasion lies in a castle that appeared not long after the demons started attacked, so Miriam sets off to try and end the otherworldly invasion. It’s a decent enough premise, and a good excuse to have a similar game world as Castlevania, but the story never does anything too interesting. Story scenes are few and far apart, giving little time to the already limited amount of characters and plot lines. This isn’t exactly a surprise considering the series it’s taking inspiration from, even if a more engaging set of characters would have at least given more impact to some of the later boss fights.

Unsurprisingly, Bloodstained’s gameplay should also feel incredibly familiar to those who have played the DS Castlevania games. Miriam’s moveset is near identical to a typical Castlevania protagonist’s, from the backwards dodge to the various movement abilities she unlocks during the game. This familiarity is far from a bad thing, since it’s always been the strongest part of the Castlevania series. Even the weapons that you find during the game are mostly the same as later Castlevania games, including a selection of swords and the iconic whip. It’s fun to experiment with different weapon types, though many of them will see little use due to their lack of range or long animations. 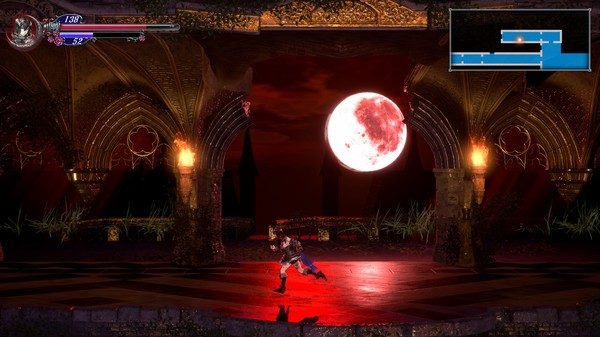 Progression is also handled in a familiar way, requiring you to defeat bosses to unlock new ways to explore the castle. It’s a formula that’s always worked well, so it’s no surprise that this is still an excellent way to encourage players to explore the entirety of the map. Most areas are unique from one another, and there are a lot of hidden areas and items to be found. The addition of map markers makes it easier to remember where previously locked areas were, and there are a decent amount of teleport points to speed up exploration. Some parts of the castle can feel a little too similar to what we’ve seen in the Castlevania series, though with how long it’s been since a mainline entry in that series some familiarity in the area themes isn’t so bad. At its best, making your way through the varied areas in Bloodstained is streamlined and there’s always something new to discover.

Unfortunately, there are a few missteps that can break this flow and lead to a less rewarding experience. The first comes in the form of the crystals that enemies drop, which reward Miriam with new skills that she can use. Crystals are not guaranteed drops outside of bosses, and for some enemies it can take many kills before you finally acquire their ability. It’s yet another carry-over from some of the Castlevania games, and isn’t a bad inclusion even if the abilities you gain from crystals are even less balanced that the weapons. For some reason though, one crystal that is required to progress through the game is dropped by a regular enemy, instead of a boss fight. This makes it very easy to miss, since there are no other skills in the game that must be gained this way to progress.

At least this is only a one-off problem, compared to the repeatedly uninteresting boss fights. The bosses of Castlevania were usually visually interesting and had some interesting mechanics, but here many of the boss encounters end up falling flat. On your first playthrough, where you’re locked to normal difficulty, a large amount of boss fights end quickly and don’t require much skill. As for the fights that last a little longer, many of them either have boring movesets or barely any attacks at all. There are still a couple of standout boss fights, but even then they still don’t reach the same heights as the genre’s best examples of bosses. Something that likely adds to the lack of impact bosses have is the relatively poor 3D work. Many area and monster designs are inventive, but the visuals overall pale in comparison to other modern metroidvania games. Certain areas and boss fights also suffer from framerate issues on a standard PS4, making the sometimes simplistic visuals look even worse.

Even with its imperfections, Bloodstained: Ritual of the Night is a good first attempt at creating a successor to the Castlevania franchise. There are definitely many areas that would need to be improved in a potential sequel, but Ritual of the Night has some solid foundations that can be build upon in the future. As it stands, Bloodstained is still an easy recommendation for those that miss the Castlevania franchise, as long as you take into account the game’s shortcomings.