With each new release, the Earth Defense Force series has slowly moved away from its origins as a budget series. Sure, they’ll never have the production values of AAA titles, but the constant refinements and quality of life changes have made the latest entries in the series some of the most enjoyable third-person you can play nowadays. Earth Defense Force 5 brings in more improvements to gameplay and a massive amount of content, leading to the best entry in the series yet. All EDF games follow the same standard storyline, where aliens invade the Earth and our aptly named heroes, the Earth Defense Force, must stop them. EDF5 follows this tradition, starting with yet another invasion by aliens, though the Earth of this story is not the same as any of the previous games. The same brand of goofy storytelling and cheesy dialogue is present here, offering up an enjoyable B-movie setting for you to start blasting aliens in. There are a lot of memorable lines and characters, mainly due to how overly dramatic most of the nameless cast is, and it has a lot more charm than that more recently developed EDF: Iron Rain. If there was one main issue with the dialogue, it’s that characters will often repeat what each other has said with only minor variations, though in some ways this only adds to the type of atmosphere the writers were going for.

EDF5 follows a tradition mission-based structure, where you kit out your character before selecting a mission and difficulty levels. You have a choice of 4 familiar classes, though they have all seen some changes from the last few EDF games. The Ranger is the most generic of the bunch, sporting a new sprint to get across the battlefield and a handful of vehicles. This class is the easiest to play overall since there aren’t any special mechanics to it, but the improved shotguns are great to use and vehicles help to increase your mobility. Air Raider can call in airstrikes and the most powerful vehicles in the game, making it a fun class if you want to cause some mayhem. Targeting air strikes has also been made much more user friendly, zooming the camera out so you can actually see where it’ll strike. Wing Diver can fly and has access to many unique energy weapons, many of which can reload themselves while not equipped. Strangely enough, even with their ability to fly the wing divers lose in mobility to Fencers. While looking like a slow class to begin with due to their heavy armour, the Fencer can boost around the map with certain weapon types. This makes them not only powerful when it comes to offence and defence, but also incredibly mobile in the right hands. 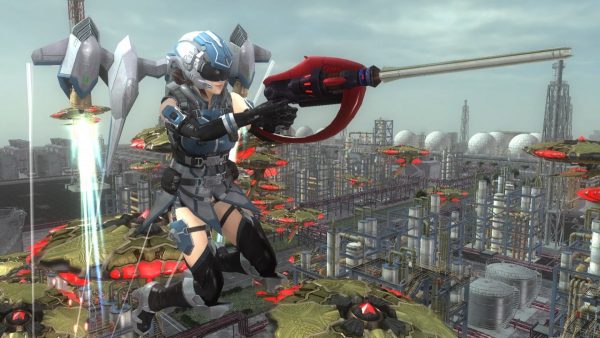 While the missions themselves mostly have the same objectives (kill aliens), the different enemy types keep the action from becoming stale. Most weapons are satisfying to use as well, especially the harder hitting explosives and Fencer’s unique melee options. No matter what class you choose, mowing down large waves of enemies while the NPCs are shouting goofy one-liners is a ton of fun, even more so in EDF5 thanks to the improved visuals. Pieces of bugs go fly after a strong hit, and the new flog-like aliens have limbs blown off in a shower of vibrant purple blood. This really gives even the weaker weapons more of an impact, since it’s easier to tell that you’re doing damage compared to the less flashy effects from the rest of the series (and even the aforementioned Iron Rain).

As you complete missions, more weapons and upgrades are unlocked. An unfortunate carry-over from previous games is the need to pick up weapon and armour boxes that enemies drop. It’s still tedious, and EDF5 would be better off if they were just automatically collected. At least it’s now possible to gain weapons and armour for classes you’re not using, albeit at a reduced rate. Weapon drops are now more frequent, with the trade-off being that you need to pick up multiples of the same weapon to level up their stats. It does lead to a better sense of progression, since you’ll nearly always be getting new weapons even if they still need to be upgraded. A new equipment slot for each class increases customisation further, by offering special enhancements to different functions of the class. Air Raiders now have their vehicles tied to this new slot, meaning that they’re now able to carry two weapons without having to give up vehicles. Meanwhile, Fencers can gain access to even more boosts and jumps, giving them even more mobility and in turn the highest skill ceiling in the game.

Once constant for all of the console versions of EDF is their often-abysmal performance, and the PS4 version of EDF5 is no different. When larger swarms of enemies are killed, buildings destroyed or even just a few explosions happen at the same time, the framerate takes a big hit. It’s never feels quite as bad as the earlier EDF games, but going through a mission without performance issues is a rarity. The PC version is the reverse of this, offering a constant 60 fps most of the time with only the occasional dip outside of the craziest missions. The options menu is very bare though, only offering a small amount of insignificant graphics settings with little way to improve performance for lower end systems. Aiming with certain vehicles and weapons while using a mouse is also cumbersome, due to them being designed with a controller in mind. 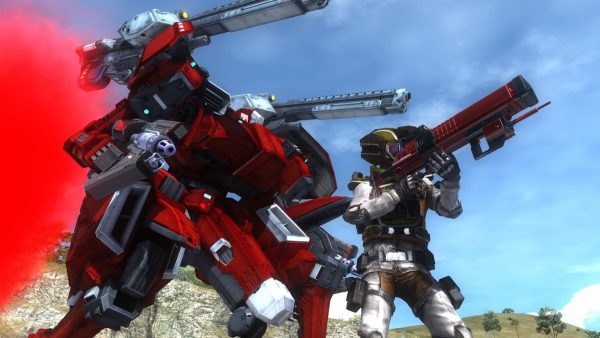 If you have even the slightest interest in the series, Earth Defense Force 5 is an easy recommendation. The quality of life changes remove some of the annoyances from previous entries, and each class offers its own unique way to play. There are still a few minor problems, like having to manually pick up weapon and armour boxes manually, but the overall gameplay is by far the strongest it has ever been.