The original Dragon Quest Builders was a decent proof of concept for a different style of Dragon Quest game, but it fell short in a few areas. For the sequel, the developers have managed to improve upon nearly every element of the game, delivering a sequel that is as enjoyable as the main series. 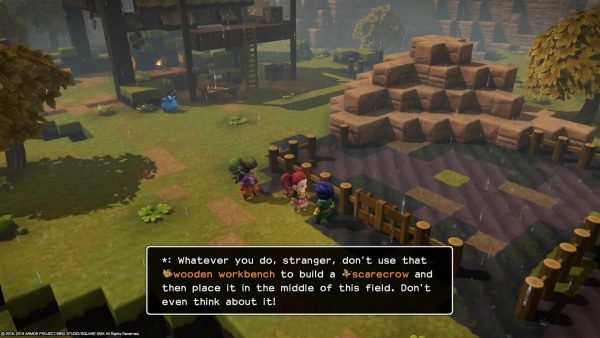 When booting up the original Dragon Quest Builders for the first time, we weren’t sure what to expect. Minecraft-style building was a unique choice of gameplay for a spin-off based on the more linear and story-focused Dragon Quest series. But it worked for the most part, using Dragon Quest 1’s story as a base for its own tale, while also bringing a new twist to sandbox games. With Dragon Quest Builders 2 it was interesting to see that, while many parts have been changed, the core parts of the original game have remained intact.

Following on from the first game, Dragon Quest Builders 2 uses Dragon Quest 2 as the theme of its story, with building being banned by the Children of Hargon. Your character is being taken by monsters due to their occupation as a builder, but ends up being shipwrecked along with a couple of unfamiliar faces on a mysterious island. After finding out that they’re on the Isle of Awakening, an abandoned island lacking in life and resources. You and your destructive new friend Malroth head off to new islands to find residents and materials, in an attempt to turn the Isle of Awakening into a new home for builders.

Progression is fairly simple, though not exactly like the first game. In that game you progressed from one island to the next with no breaks in-between, whereas here there are less islands to explore during the main story but you have a chance to unwind on the Isle of Awakening before heading to the next story area. Each island in Dragon Quest Builders 2 has its own storyline, along with a focus on one particular mechanic of the game. For example, the first island you visit is used to introduce farming, along with the basics of room building. 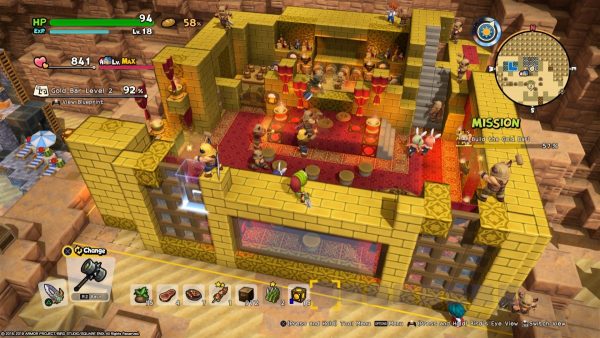 The story is still in many ways an extended tutorial, but the reduced number of main islands means that each one has more time to show off its characters and environments. This works for some of the story, like the aforementioned first island called Furrowfield. Here you build up the town from nearly nothing, turning it into an area filled with farmland and various facilities. The more you build, the more items you unlock and even more townspeople appear, so there’s always a sense of progression. This is constant throughout every island, but they can suffer from being too dragged out at times. The second island is the worst for this, repeating the same jokes over and over again. The stellar localisation does mitigate some of the repetitive dialogue and humour, but many of the characters needed to be more fleshed out.

Fortunately, any issues with the story can be easily ignored thanks to the incredibly fun gameplay. The Builders series focuses a lot on the buildings you create and how townspeople can interact with them. A room two blocks high with a door of any type is the basic layout for a building, and from there you can furnish them with various items to create different types of buildings. From bedrooms to armouries, there are many buildings to create. You’ll be required to build certain rooms during the story, but a lot of them are left for you to discover. The addition of new tools further improves building, giving you the ability to create walls or store an infinite amount of liquid. From more items to craft to new building recipes, there’s even more to create than the first game, and you’ll rarely feel limited in what you can build compared to the first game. 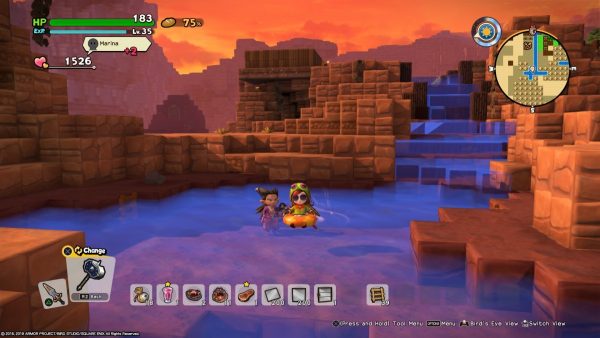 Exploration has also been improved, mainly in regards to how you get around the map. Instead of slowly running around the map like in Dragon Quest Builders 1, you have access to a stamina gauge that lets you sprint at a much higher speed. As you progress through the story and level up, the amount time you can sprint is increased even further. You’ll also unlock the ability to glide during the first island, making larger gaps and mountains easier to navigate between. These, combined with a generous amount of fast travel points, make gathering supplies or completing quests from townspeople much more streamlined. The pace of Dragon Quest Builders 2 feels much faster overall, especially when you take into account the new building related tools, and is welcome change. The only area that is somewhat of a let-down is the battle system which mainly relies on button mashing, but having Malroth around during the story does at least cut down on the amount of fighting you need to do.

All these improvements would have less meaning if there was little to do outside of the main story, a problem which made Dragon Quest Builders feel lacking in content. The Isle of Awakening makes up the majority of content outside of the story islands, and is likely where a lot of people will spent most of their time. The island is split into three main areas, giving you more land to work with as the story progresses. Outside of a few required structures (which can be demolished later) you’re free to build whatever you want, with some optional targets that give you access to some of the new tools. These targets are good for those that want a more focused experience similar to the main story, but there’s a lot of room for your own original creations. As you complete the targets and create more buildings, you’ll keep unlocking even more mechanics. There are rare crops that give you better cooking ingredients and dyes, pets that can be bred to create new breeds and new ways to categorise your creations. Making multiple towns, each with their own residents and themes is an incredibly fun and an easy way to spend hundreds of hours. Performance can become a problem on PS4 once you’ve built a lot of stuff though, even with the cap on how many villagers and buildings you can have. It’s not a huge issue, but it’s something to take into account when making more complex designs.

It’s good that the Isle of Awakening is so fleshed out, because if you’re into multiplayer it’ll be where you spend most of your time in game. Unlike the first Dragon Quest Builders, Builders 2 offers 4 player co-op, with a few caveats. Aside from the Isle of Awakening, the only places you can visit with friends are material islands, small randomly generated areas that give you access to unlimited amounts of certain items. These are a good way to collect rare blocks or crafting materials, but not particularly interesting to explore with friends. There’s also no way to play with random players, or search through available islands aside from those that belong to your friends. It’s a step in the right direction compared to the first game, but Dragon Quest Builders 2 is still primarily a single player experience. 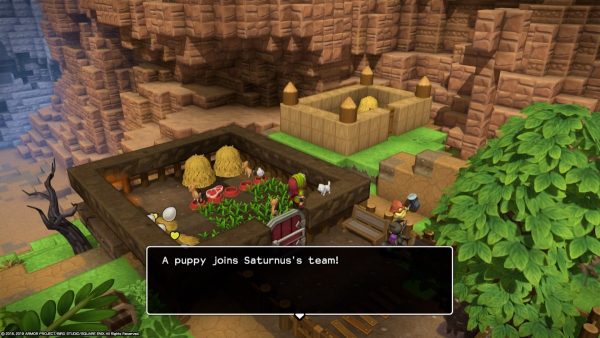 As long as you’re not expecting a fleshed out multiplayer mode, Dragon Quest Builders 2 is a phenomenal sequel that is a good alternative to the mainstay sandbox games. With new DLC being released soon, there is more than enough content here for those that like to build or anyone that just wants to play a more focused building game.