Catherine was always a strange game, even when compared to some of Atlus’ weirder releases. Mixing a serious story based on relationships and preparing for the future with fast paced block-pushing gameplay made for a unique experience, even if a couple of problems held the game back overall. Full Body brings this oddball game to a new generation, expanding on the excellent puzzle gameplay but improving little about the disappointing story. 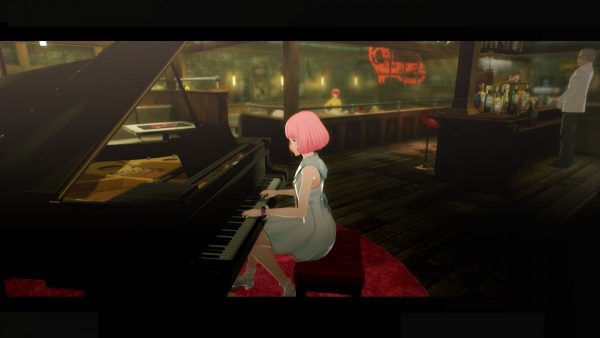 The original game told the story of Vincent, a young man who quickly finds himself in a dire situation after cheating on his long-time girlfriend Katherine with the flirtatious Catherine. The majority of the game was spent on Vincent coming to terms with what he’d done, while also contending with mysterious nightmares that forced him to climb up ever higher towers or face death. Full Body introduces the amnesiac Rin into the mix, who ends up working at Vincent’s favourite bar the Stray Sheep. This turns what was originally a love triangle into something more complicated, making Vincent’s predicament even more complicated.

Vincent is a very different protagonist compared to those usually featured in most modern Atlus games. He’s older, has a more mundane personality and opinions, and has trouble dealing with his feelings towards his current girlfriend and the new faces that have suddenly appeared in his life. Compared to the younger heroes of Persona and Shin Megami Tensei, Catherine’s story manages to cover some more adult oriented subjects and, for the most part, handles them well. Vincent’s inner turmoil is communicated through some well written (and expertly voice acted) dialogue, and the conversations between him and his friends in the Stray Sheep feel realistic. Catherine does a good job of conveying the relationships Vincent already had before the game starts… except with one of the most important characters.

You see, for all the good parts of Catherine’s story and its characters, the actual love triangle between Vincent and the similarly named heroines often feels rushed. Over the course of the entire game you don’t actually spend much time with either woman and, with the short amount of time the story takes place in, Vincent’s relationship with Katherine is not as fleshed out as his friendship with the other regulars of the Stray Sheep. To make things worse Rin ends up appearing far more frequently than the other two, the lack of time being spent with the older love interests becoming even more apparent. Unfortunately, even the small number of new scenes in Full Body for the existing heroines do little to improve the overall story regardless of which route you follow. Even with the poor storytelling though, the fantastic gameplay goes a long way in making Catherine a more enjoyable experience. 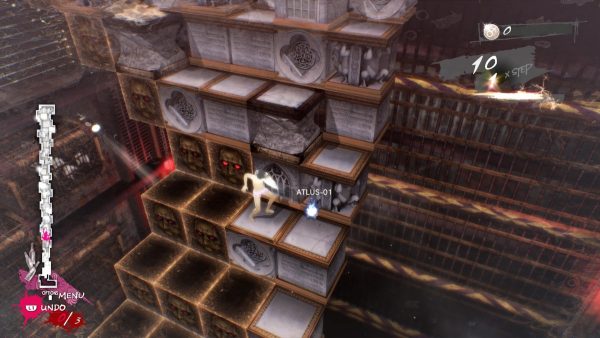 Gameplay in Catherine is split into two main segments. During the evening, Vincent spends his time drinking at the Stray Sheep. Here he can talk to his friends, the bar staff and various customers that come and go during his time there. Chatting to different people will often lead to Vincent being asked questions, his answers changing the value of an ever-present meter. This meter is used to determine the ending you can get, along with Vincent’s inner thoughts at certain points during the game. This system doesn’t feel very impactful until near the end of the story, since most choices don’t change what actually happens during the first half of the game. You’ll also often receive texts from Katherine and Catherine, and instead of replying with one of two answers, you’ll instead compose a response by going through a few branches of text choices. Most of these still only change the meter one way or the other, but it at least feels a little more involved compared to choices made elsewhere.

While conversing with various people and replying to texts makes up most of your time outside of the nightmares, there are a few distractions here and there. Vincent can play the arcade game Super Rapunzel, which in many ways acts as a tutorial for some of the harder puzzle sections you’ll run into. There’s no time limit, so you can figure out how to play and improve before the next night starts. Being a bar, the Stray Sheep also has a variety of alcoholic drinks, and the drunker Vincent gets, the faster he can move during the nightmares. The narrator also provides different facts about each type of drink once Vincent finishes it, so this is certainly the game to play if you want some alcohol related trivia.

During the night, Vincent must contend with the mysterious nightmares that see him and others climbing up towers made of varying block types. Controlling Vincent is simple, though there are a few quirks with movement. He can move around, push blocks and climb on them to reach greater heights. It’s easy to pick up, though the directions you press work differently depending on if you’re standing on block or hanging from it, which can take some getting used to. Vincent can only climb one block at a time without the use of items, so pushing blocks into the right places is key to advancing up each tower. As you learn new techniques and more block types are introduced, the difficulty of each stage quickly ramps up. 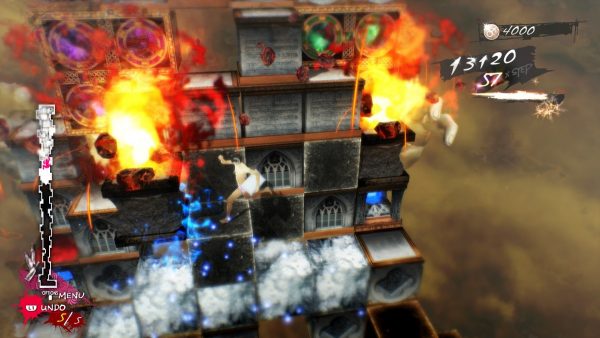 Catherine has a few different methods it employs to try and stop the quickly increasing difficulty from becoming too frustrating. The first is the aforementioned Super Rapunzel, which lets you learn new types of block patterns that will be thrown at you during harder stages. In-between stages in the nightmares, certain characters will give you new techniques that you can put into practice later on. These come with a handy video tutorial, and in Full Body they can also be viewed at save points if you want to look up a certain strategy. If you find yourself stuck or want to try out a different approach to a segment of the stage, it’s possible to undo a certain number of moves based on the difficulty level you choose (outside of Hard mode).  Each difficulty setting also changes the layout of each stage, giving an easier time to those having trouble while adding further content for those that challenge the harder difficulties during later playthroughs.

Improving your climbing skills and aiming for higher ratings on each stage is where Catherine shines, and the addition of new stages makes this an even more complete package for those that just want to enjoy the puzzle segments. A brand-new remix mode also introduces new block shapes, making for even harder puzzle segments compared to classic mode. Add in an enhanced multiplayer mode with online play and there’s a hefty amount of content to play through, even if you’ve already done everything in the original release.

Rounding out the changes in Full Body are some tweaks to the game’s overall presentation. There’s still a 30 fps cap which is a shame, and the overall texture work doesn’t seem massively enhanced, but the new animations and camera angles for certain cutscenes do enhance the game’s already stylish visuals. It isn’t a great improvement over the original though, even less so when you consider Catherine Classic on PC supports higher framerates and resolutions. There’s also the anime cutscenes, which vary in quality quite dramatically and in general look far worse than the in-engine cutscenes.

Whether Catherine: Full Body is worth a purchase will depend on what you want out of it. Those that have never played the original, or just want some new content for the puzzle segments, will find a lot to love here. If you’re looking for an improved story though, Full Body will likely be a disappointment. Adding a new character into an already rushed story was not a great decision, and it only leads to the plot feeling even more disjointed.