Square Enix have published a few games over the last few console generations that try to emulate the feel of classic JRPGs with a modern twist. Bravely Default, Octopath Traveller and I am Setsuna all fit this description and had varying levels of success. The latter was the work of Tokyo RPG Factory, Oninaki being their third attempt at creating a JRPG that can rival the classics. Like their last 2 releases though, Oninaki ends up mishandling its unique ideas and leads to a forgettable experience. 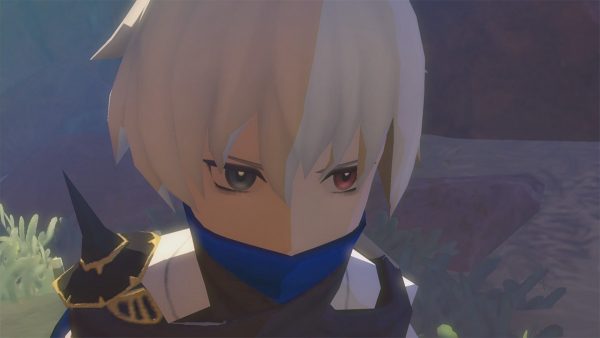 Despite what the cartoony character models and overall artsytle might lead you to believe, Oninaki is quite a dark game. Reincarnation plays a big part in the world, being the driving force behind the laws and beliefs of the world and its inhabitants. Watchers, those that can travel to and from the realm of the dead, are tasked with making sure spirits are free of regret and can pass on to their next life. Kagachi is one of these Watchers, his journey through the world slowly making him question the nature of reincarnation and how it affects people’s lives.

Initially, Kagachi comes of as a rather bland protagonist, with little to say and even less interaction with other characters. He does improve somewhat, but with how the story is paced it’s hard to really care too much about him by the end. This is because of how quickly characters are introduced and then thrown aside. What should be a shocking and tone setting moment at the start of the game ends up being rehashed multiple times, having anyone who seems remotely important killed off at a moment’s notice. Every plot point for the majority of the game is also incredibly predictable, and the one main plot twist comes off as confusing and rushed rather than impactful. Once the ending credits rolled, we were hard pressed to find a single character that could be considered memorable, either due to having no screentime or the plot ruining what little personality they had. 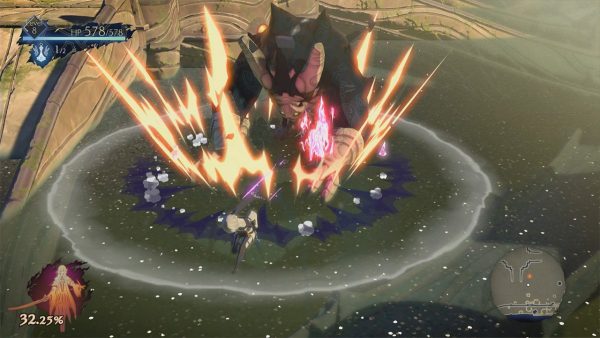 Combat fares a little better, but is marred by strange design choices and a lack of variety. Kagachi’s weapons are tied to Daemons, beings that can possess Watchers to give them enhanced abilities. Each Deamon gives access to a basic combo for that weapon, along with a series of unlockable skills that go on cooldown after they’re used. While you can equip 4 skills per Daemon, you’ll generally only use a couple due to how slow many of them are relative to how weak they end up being. It’s also impossible to combo regular attacks into a skill, and the opposite is only available after unlocking an upgrade for that Daemon, meaning that after the end of every regular combo there’s a long pause before you can act again. It makes even the fastest weapons feel incredibly sluggish and the slowest near unusable during boss fights.

There are a few other mechanics related to the battle system, though they do little to change how uninspired it is. Gemstones can be slotted into weapons to adds a variety of basic effects like bonus damage or shorter cooldowns. Further customisation comes in the form of weapon orbs that drop after attacking enemies, which are used to purchase upgrades for the Daemon of that specific weapon type. This system is relatively linear, and with a Deamon’s power being increased by having more upgrades there’s little reason to try and use multiple weapons types instead of one stronger weapon. Daemons can also enter a manifested state after the ‘affinity’ meter reached 100%, increasing your stats and allowing animation cancelling for every move. While this does make you more powerful, it’s also closer to how the battle system should have been to begin with. Combat is less sluggish and your evasive moves are actually useful, so only being able to use this mode occasionally ends up being jarring.

Performance on Switch is another problem area, further adding to the clunky combat. Oninaki is locked at 30 fps in both handheld and docked modes, but it often has trouble holding this framerate during busier moments. The handful of fully animated cutscenes are the worst for framerate issues, any visual effects causing the game to look more like a slide show. Furthermore, while the visuals are fairly colourful, character and enemy models are often poorly animated, making combat even more frustrating since it can be hard to tell the range of enemy attacks. The bland environments do little to help make playing more enjoyable either, each area being a series of uninteresting fields or rooms that are just repeated a few times. 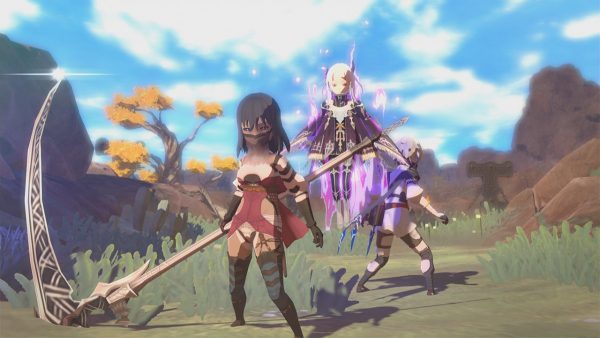 After a strong opening, Oninaki just gets worse the longer you play. The unresponsive battle system combined with a story that is far too rushed makes for a thoroughly uninteresting game. There are far better JRPGs, on the Switch or otherwise, that already released or coming out in the near future, making it hard to recommend Oninaki even at a heavily reduced price.