There are often times where you don’t want to play an epic 100 hour RPG, instead turning to shorter games to have a fun time. Cat Quest was the perfect way to spend a few hours without having to think too hard, offering some simple action RPG gameplay filled with tons of cat puns. The sequel adds more content, abilities and local co-op, but not much has been done to make it feel fresh for those that have already played the original. 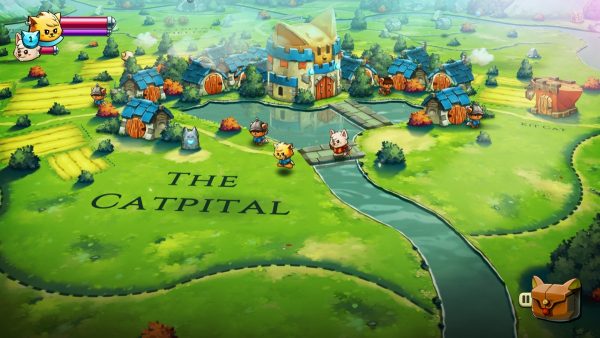 As with the first game, Cat Quest 2 spends little time tying to build up an interesting story. You play as the old kings of Felingard and the Lupus Empire, who are brought to the current day to stop the two nations from continuing their war. There are only minor ties between the stories of both games, and once again you can see the ending after only a couple of hours. Most of the game is instead spent on picking up sidequests and exploring the land for optional areas. It’s still a longer story than the first game, though that’s not really saying much with how short both games are overall.

Little has changed when it comes to gameplay either. Regardless of whether you play solo or with a friend, both kings will be present at all times and can be switched between when not in co-op. Aside from one character being a cat and the other a dog, there is no difference between them in regards to their abilities. Each has a basic combo, a quick dodge and a maximum of 4 spells. Combat is simple and fast, clearly marked attacks giving you enough time to dodge out of the way before resuming your attack. You’ll rarely have to change up how to fight different enemy types, but it gets the job done.

Most of the differences in gameplay come from the new weapon type and spells. Aside from basic swords and a handful of slower greatswords, there are a multitude of staves that each have their own ranged attacks. Ranged attacks are a nice addition, especially when combined with the co-op gameplay, but at the end of the day you’re still just mashing one button while occasionally dodging. Having 2 characters does mean that you can also have 8 spells available at any one time, but there’s usually not much incentive to use more than a couple of spells. This is due to most spells just being aoes that do different elemental damage, and we never encountered an enemy that required the use of a specific spell to defeat.

Questing in Cat Quest 2 is a simple affair as well. You roam around the colourful overworld, talking to NPCs and picking up sidequests for new gear, money and experience. Sidequests are what you’ll be doing most of the time, and are usually required to keep your level high enough for the main story. There isn’t much variety in the types of quest you’re given, with many just requiring you to go to a marked area and kill a few enemies, but the many animal related puns can be funny from time to time. Unfortunately, the writing can’t save the lack of area and enemy variety. You’ll be exploring samey caves and ruins for most of your journey, and there are only 2 different themes for the overworld areas.

Equipment is another aspect of Cat Quest 2 that has seen a few tweaks, without really changing much overall. While questing and exploring the world, you’ll acquire new weapons and armour. These have a main stat, like attack or health increases, along with the occasional extra bonus effect. Some equipment might give you extra experience for killing enemies or a higher chance of critical hits. Finding the same piece of equipment multiple times, or upgrading it using money, will increase its main stat further. The problem with this system is that, while it does eliminate a common RPG trope of having lots of the same gear, the lack of variety in stats and effects mean that there is isn’t really much incentive to go try out many types of equipment.

While this may seem like an overly negative review, Cat Quest 2 is still a competent game. We never ran into any major issues, and the charming artsyle of the original has been improved upon even further. It’s just that the game feels a little too similar to the first Cat Quest, even with the additions to combat and the ever present co-op character. The simple gameplay systems of the first game aren’t enough to keep your interest for another, longer, game. 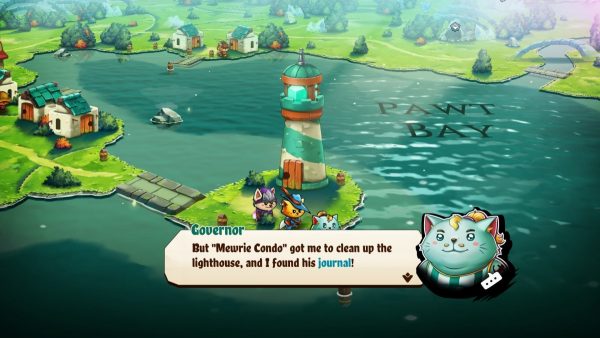 Cat Quest 2 is enjoyable for the few hours it takes to beat the main story, though not much has changed from the first game. Local co-op and a few new attacks do little to keep the game interesting after the 10th bland cave or dungeon. You’ll have an OK time if you just want a cute action game to play for an afternoon, though anyone expecting a big improvement from the first Cat Quest will be left disappointed.