After many portable releases and a long stretch of Nintendo console exclusivity, Monster Hunter World was released on the PS4 last year. Boasting improved visuals, something the series was in dire need of, and helpful quality of life features, World successfully improved upon the old style of gameplay while keeping the spirit of the older games intact. With the base game creating a good foundation for future updates, Iceborne’s goal was to add enough content to keep players invested in the game, while also trying to improve the somewhat disappointing endgame. Thankfully, the expansion manages to improve upon World’s already fantastic gameplay, offering a whole host of new monsters and techniques for players to master. 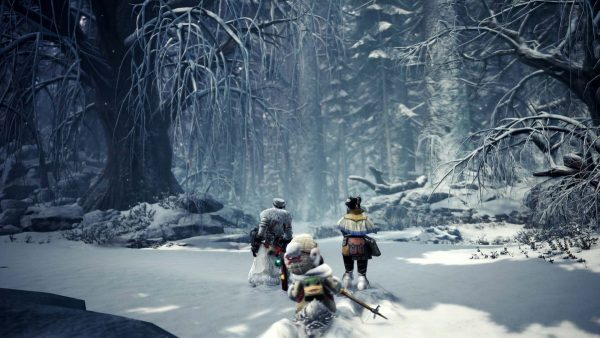 Iceborne continues directly after the ending of Monster Hunter World, where the research commission that were tasked with exploring the New World have discovered a previously hidden continent with a unique snowy climate. Quickly creating a new base to aid in the exploration of this new land, the hunters get to work in finding out more about this unique area of the New World. Everyone from the base game makes a return, with certain characters like The Tracker having more time in the spotlight. There still isn’t much of a focus on the story overall, but it does a good job of setting the stage for all the new content there is to discover.

Seliana, the new hub area in Iceborne, is the start of the many positive changes over the original release. It’s a charming village, reminiscent of areas in the older PSP Monster Hunter games, and is far easier to navigate compared to World’s Astera. Everything is a short walk away, no more long trips or loading screens just to reach the canteen or forge. It makes preparing for a hunt far less tedious and takes no time at all to get used to, unlike the multi-layered layout of Astera. The change of scenery hasn’t brought many additions to the facilities you can access, with the only major addition being the steamworks. Here fuel build up over quests, which can be supplemented with certain items found during mining, and using it gives you easy access to consumables and the occasional rare item. It’s a nice way to unwind after a mission, watching the list of gained items slowly increase as you use more fuel.

After exploring your new base of operations, it’s not long before you’ll find yourself in Iceborne’s new region. Compared to snowy areas in previous Monster Hunter releases, Hoarfrost Ridge brings a lot more to the table. For starters, aside from the usual cold debuff that requires a hot drink to counteract, the buildup of snow can impede your movement without the right equipment. The verticality of World’s environmental design is also here, with plenty of slopes and ledges to ambush monsters with. It’s an excellent addition to an already solid list of hunting areas, offering some of the most impressive snowy locales this generation. 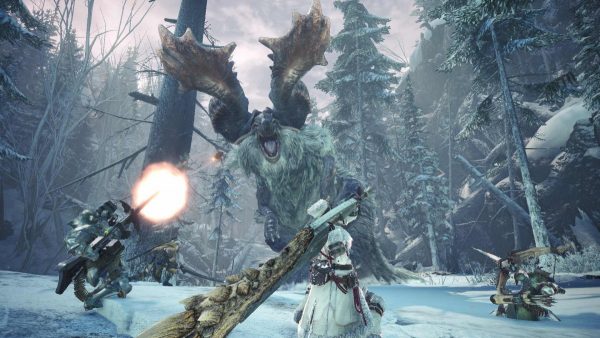 A new hunting area wouldn’t be much without a brand-new set of monsters to fight, so it’s good to see a large variety of new and familiar faces showing up during the course of the expansion’s story. Banbaro, a monster you encounter early on in Iceborne’s story, is a great way to warm up for some of the harder fights in the game while also matching the theme of the new area. It’s a behemoth of a monster, sporting two large antlers that it uses to turn trees into makeshift battering rams. Meanwhile Nargacuga and Tigrex, both first introduced during the Monster Hunter Portable games, make their return. A good balance has been made between bringing back iconic enemies while also showing off some new monsters for new and veteran fans to battle. The overall monster count may not reach the dizzy heights of Monster Hunter Generations’ 100+ roster, but it’s more than enough to keep anyone hunting well into next year.

A new expansion also brings tougher quests, which means that even monsters from the base game can be a real challenge to fight. The first few quests of the new master rank are a big jump from high rank, especially if you going straight into them after World’s main story. It’s a good way to make monsters you’ve hunted many times more engaging, and the new gear sets you can craft from them are extremely useful early on. It’s always been enjoyable to progressively craft better and better weapons and armour, so it’s nice to have a reason to keep upgrading your equipment for the harder fights to come.

While there may not be any new weapons in Iceborne, most of the old ones have received some new moves. Some of these new attacks revolve around the clutch claw, a completely new mechanic to the series. It can be used regardless of the weapon type, allowing you to latch onto monsters. After attaching to a monster, you can slam them into a wall for an easy knockdown, or hit them with a flashy attack before jumping off. After a single clutch claw attack with a heavy weapon, or two with a light weapon, a weak point is left on the affected body part. This makes breaking specific parts easier and can be the deciding factor on whether you defeat the hardest monsters in the game. As for weapon specific attacks, they really help improve an already solid armoury. The long sword gained some flashy new moves that make it even easier to chain combos together, while charge blade users can temporarily power up its axe mode. 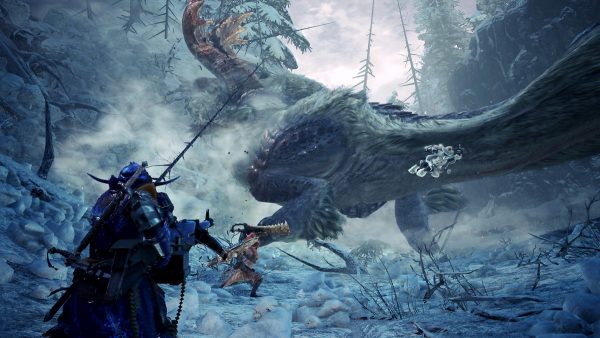 All of these positive changes are tied together by a completely reworked endgame that manages to keep every monster type in the game relevant. Without diving too deeply into spoiler territory, after the main story is over you unlock a new area where you spend most of your time outside of event quests. Here, hunting monsters will increase the levels of specific regions in the area, unlocking harder monsters to fight. High level weapons and armour will often require material from multiple monsters, and fighting any monster in a region will level it up, so there’s more of an incentive to fight even the weakest monsters in the game. It can be hard to level up specific regions, especially if you want to max out multiple ones at the same time, but overall this is a massive step up from the somewhat bland endgame of the base game.

Iceborne is a fantastic expansion, offering a crazy amount of content for new and returning players alike. The clutch claw makes each hunt more dynamic, and the revamped endgame really makes for a more enjoyable experience after the story is over. This is how DLC should be done, and the fact that there’ll be even more content added later down the line is icing on the cake.