Even after the release of the Switch, many great RPGs still managed to make their way to the 3DS in English. From Pokémon and Yokai Watch to a multitude of Atlus releases, the system managed to keep building up a solid library of games even after a year of being overshadowed by its successor. The most obscure of these RPGs would most likely be The Alliance Alive, a charming game that tries to do its own thing, and often succeeds. Even a bare-bones remastering isn’t enough to stop us from recommending The Alliance Alive HD Remastered to those looking for a relatively short JRPG with a lot of character. 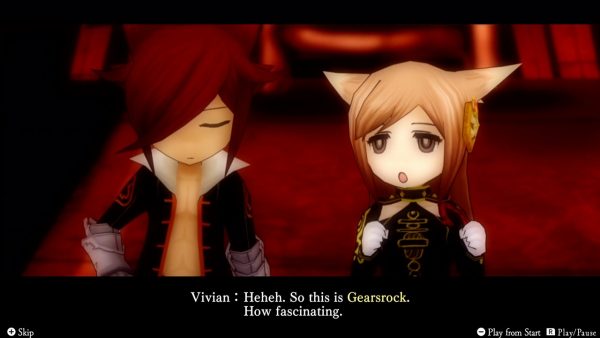 The Alliance Alive revolves around a conflict between humans and daemons. Long before the events of the story a barrier splits the world into, segregating humans into realms controlled by daemons. Even after 1000 years, the barrier has still not disappeared, and humanity is still enslaved. The story focuses on three groups, who each find themselves working together to try and finally free humans from the rule of daemons. The opening hours to The Alliance Alive are spent with each group of protagonists, as you learn more about the current state of the world they live in.

This approach to storytelling is a great way to introduce many characters, letting you get to know each of them before moving onto the next group. From childhood friends Galil and Azura, to the eccentric daemon Vivian and her butler Ignace, they each add more to the story as you progress through the initial chapters of the game. Compared to a game like Octopath Traveller, where you’re experiencing multiple stories with little connection, the character’s fates in The Alliance Alive are more intertwined, and you’ll get to see certain events from multiple perspectives. Even with the game going through multiple character introductions, it never takes longer than needed. This is a short game when compared to many modern JRPGs, and it makes full use of the hours it does spend on the story. While the story may be enjoyable overall, the omission of voice acting is jarring during cutscenes. It almost seems like it was planned originally, but wasn’t possible in the full release for whatever reason. It’s not enough to ruin the story, but it would have been nice for this updated version.

While the main story may move to a more linear structure after the opening chapters, a heavy focus on exploration allows for an abundance of extra content. The game constantly adds new features, from optional party members and areas to new vehicles that open up more of the world. While some of this is tied to your progress during the story, there is a lot that you’ll have to find on your own. It really rewards you for checking out 100% of the map, since you’ll usually find something of worth off the beaten path. One of the vehicles you unlock later on does somewhat ruin the sense of discovery due to how easily it can move around, but there’s still enough content to keep things interesting. 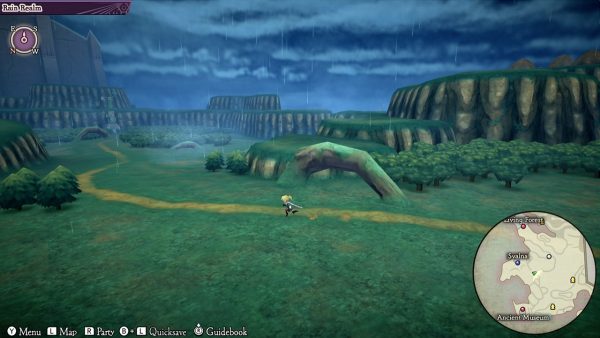 A greater focus on exploration and side events ties into a main feature of the game, the guild system. In the world of The Alliance Alive there are five guilds, each with a particular speciality. When adventuring you’ll often come across places where you can build new guild towers. These allow you to gain the benefits of a specific guild, along with any other towers that are linked with it. Guilds level up by building new towers and recruiting new members, each of these requiring you to scour the land for new building opportunities and recruits. There are many named NPCs in each area of the game, so talking to everyone you meet is more worthwhile than a lot of other JRPGs.

Unfortunately, for all of the positive changes The Alliance Alive brings to the genre, it doesn’t quite manage to go all the way in creating an engaging battle system. Battles are turn based, with a party member’s attacks costing SP that is partially restored each turn. Simple stuff, but there are few aspects to this system that don’t quite work. Firstly, you learn attacks by using weapons instead of leveling up. Fighting stronger enemies seems to increase the chances of learning new abilities, but it’s still up to chance whether you’ll learn a new move. While a solid system in theory, many moves end up feeling redundant thanks to a combination of similar effects and the talent system.

Battles reward talent points in lieu of the standard experience used in RPGs, with HP and SP having a random chance to increase after battles. Talent points are used to unlock talents which are split into categories that cover each weapon type, along with extra bonuses like cheaper shop prices or a lower chance of being ambushed by enemies. Some of these talents are useful without being overpowered, like the ones that lower your chances of being attacked when using a specific weapon. Others, mainly the talents that reduce SP usage and increase regeneration, end up trivialising most battles. Most of a weapon’s move set ends up being useless when you can spam strong attacks for a lower cost, or even for free. There’s also little reason to experiment with multiple weapon types, since most of the best attacks are just variations of ‘Deal x amount of damage’. 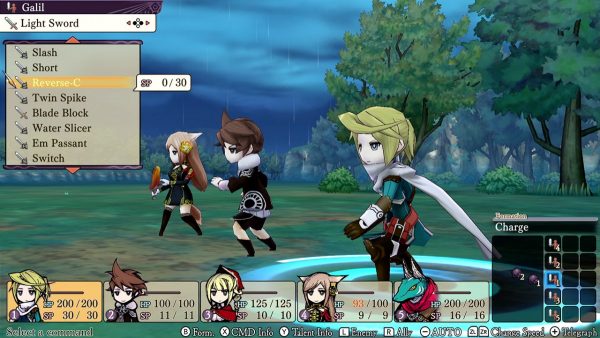 If the game’s difficulty was increased slightly, and some changes were made to talents and SP, the battle system’s better features would have more of a meaning. Formations allow you to tailor how your party is positioned, and each character can be assigned a stance to change their stats. This allows for more control over where damage is going, while also giving different weapon types some importance, however minor it ends up being in practice. Shields will block damage done to the entire party if used by a member in a guard stance, while healing can be improved using a support stance. It’s a system that allows for a lot of micromanagement, especially when you upgrade the tactics guild and unlock more stances, but there are only a handful of battles that require much understanding of how it works.

Even with these shortcomings The Alliance Alive is a fun JRPG, but the “HD Remastered” part of this release leaves a lot to be desired. Visually many of the textures and character models look outdated when brought to HD consoles, even when playing in handheld mode on the Switch, and the game still has a 30 FPS lock. The hand-drawn art style still retains its charm, but the lack of any updates to the graphics outside of resolution is a big disappointment. On a more positive note, the menus and UI that had to be redesigned for a single screen have been implemented well, though some menus look a little cluttered.

The Alliance Alive HD Remastered does a lot of things right, and a lot of things poorly, but on the whole it’s still enjoyable. Its characters and exploration are enough to make up for the shortcomings elsewhere, all wrapped together in a pleasing art style. Little has been done to update the game’s visuals for more powerful systems, and there’s no extra content for people who have played the 3DS version, but this is still an excellent way to play The Alliance Alive.