As Code Vein’s release slowly drew near, the somewhat disappointing God Eater 3 earlier this year left us wondering if the team had learned from their past mistakes. It had already been heavily delayed, and the silence up until a few months ago cast doubt over the future of this new IP. After playing through multiple betas and the full release though, Code Vein ended up being a fairly solid title that does enough to differentiate itself from other soulslikes. 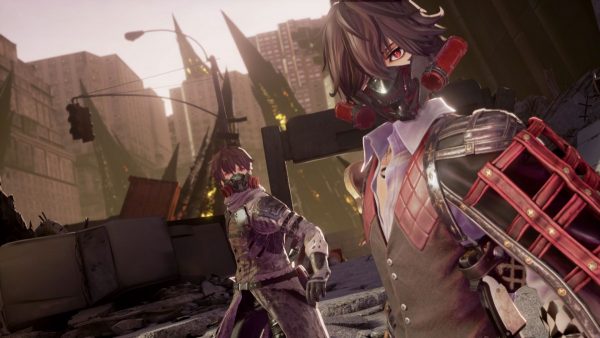 At its core Code Vein is an action-RPG that has some clear similarities to the Souls games, but it’s easy to see that a lot of work has been done to make it feel unique. The most noticeable difference is easily the setting and visual style. Instead of a fantasy world filled with dragons and other mythical creatures, Code Vein borrows heavily from the team’s main series, God Eater. From the anime inspired character designs to the overall look of each area, you’d be forgiven for thinking that this was just another entry in the long running hunting series. But when it comes to how this setting is used, Code Vein manages to tell a more interesting story than its predecessor.

After designing your protagonist using the robust character creator, you’re quickly dropped into the game’s decaying world. You learn from a mysterious girl named Io that your character is a revenant; someone that is no longer human, relying on human blood to survive. After your capture and escape from a band of desperate revenants, you’ll run into the leader of a group trying to find a solution to a revenant’s need for blood. Blood beads, strange fruit-like objects that grow from certain plants, can be used as a substitute for blood, so the group travel to find the source of these plants and in turn free revenants from their hunger.

Code Vein’s story is a mixed bag overall. On the one hand, the backstory behind the world’s current state and how revenants came to be is handled well. It’s also told more directly than a Souls game, without giving away too much information early on, and you learn far more about the events leading up to the game compared to God Eater. However, many characters are given little time to shine, often having one major scene before being left in the background. This was also a problem with God Eater 3, though at least it’s not quite as bad here. Vestiges, solidified fragments of a revenant’s memories and experiences, are found scattered throughout the game and provide you with backstories for each main characters. While not the most elegant way to tell a story, it’s still enough to make you care about most of the cast, even if they don’t have much importance in the main narrative. 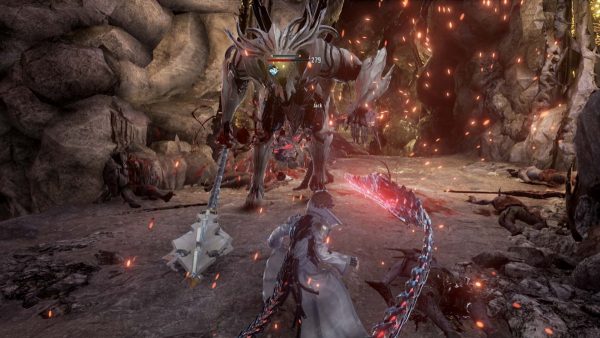 If the story and characters are closer to God Eater, gameplay in Code Vein leans more toward a typical Souls game, though you can still feel the influence of the former here. The basics are what you’d expect, from light and heavy attacks, blocking, parrying, dodging and sprinting. It’s a familiar setup, even with a different button layout, giving you more time to focus on what’s new instead. Heavy and light attacks can be held to perform another set of attacks, and a drain attack similar to devouring from the God Eater series is available. The drain attack is used to gain ichor quickly – though it can also be gained through normal attacks – which is then used for gifts. Gifts range from your standard buffs and elemental attacks to flashy melee skills, giving you a decent number of tools to work with. Switching between melee and gifts adds a satisfying gameplay loop to combat, and the bonus ichor you gain from parries and drain attacks makes them useful no matter what build you’re using.

Leveling and stats have also been changed to make trying out new gameplay styles far easier. While increasing your level will always improve your stats, what stats you have are determined by your blood code. Blood codes are essentially classes, each with their own stat scaling and unlockable gifts. Since you can change your blood code at any time, this means that you’re never stuck with set stat values for the entire game, unlike Dark Souls. So, if you want to switch from using melee attacks exclusively to a more gift focused build it’s as simple as changing to the appropriate blood code. It’s a fantastic system, opening up many different play styles without being forced to make new characters. Gifts from one blood code can also be used on any other with enough use, adding even more possibilities to battles. 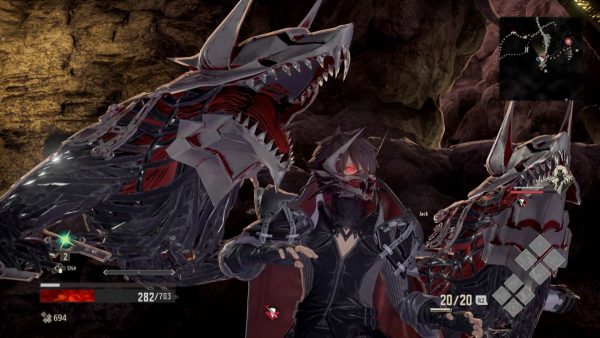 Combat is by far the best part of exploring each area, especially as you unlock new blood codes and equipment, though it’s not enough to make up for the lacklustre level design. Most areas follow the same pattern: Follow along a main path, occasionally go down an alternate route for extra items, unlock shortcuts to aid in backtracking and eventually fight a boss. Obviously, you could say this about most soulslikes, but in Code Vein there isn’t a whole lot done to differentiate areas aside from the visuals. Most are lacking an interesting level-specific gimmick, and there are only a small handful of enemy types throughout the entire game. A couple of areas do try and change things up, but the lack of distinct landmarks can make them confusing instead of interesting to navigate.

Bosses are another part of the game that can be disappointing at times, though this also ties into Code Vein’s inconsistent difficulty curve. Some bosses can be melted within a minute, while others actually manage to put up a challenge. It’s almost funny when a cutscene is hyping up an upcoming boss fight, only for it to be defeated in the blink of an eye. In fact, some regular enemies end up being more dangerous due to their high damage and habit of attacking in groups. There are still some memorable boss fights, aided in part by the game’s phenomenal soundtrack, and the new game plus mode allows you to crank the difficulty up to compensate for this poor balancing.

While Code Vein may share some of God Eater 3’s problems, the final product is actually quite enjoyable. Areas may not be as intricate as something from a Souls game and combat isn’t as fluid as Nioh’s is, but it’s still a fun game for the most part. The blood code system allows for a good amount of build customisation, and the game overall manages to handle its mechanics and themes better than the God Eater series.