2019 has seen the release of multiple long-awaited crowdfunding projects. From the successful launch of Bloodstained (disregarding the Switch version) to the disappointing Children of Morta, it’s good to see these games finally be released in some form. As another heavily delayed crowdfunded title, Indivisible had a lot to live up after all these years. Unfortunately, beautiful artwork and unique mechanics are not enough to hide the glaring flaws present in every aspect of the game. 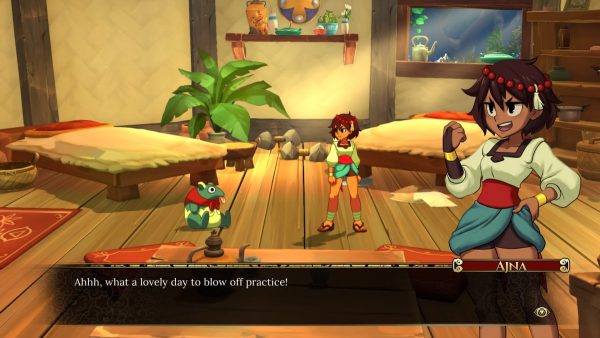 Eschewing the long-winded openings of many other RPGs, Indivisible blazes through its opening scenes. Ajna, a young girl with a short temper, loses her father to soldiers of a fanatical regime within 10 minutes of the game starting. From there, she somehow manages to absorb her father’s killer, along with others she meets during her journey. Her goal is initially to defeat the one who ordered the soldiers to attack, though it soon changes into a quest to save the world. The speed at which Indivisible’s story is told felt refreshing at first, setting up the main character’s goal without dragging things out. It quickly becomes apparent though that the game has trouble telling an interesting and consistent story in this short amount of time.

Our main issue with the game’s story is that most events are never given enough time to develop into anything engaging. One damning example of this is the aforementioned killing of Anja’s father, which is the start of Indivisible’s inconsistent tone throughout the main story. She only grieves for her father briefly, and ends up being incredibly quick to forgive the one that killed him. Most story beats follow a similar structure, having something happen and then briskly moving on. One section of the story later on does try to justify the speed at which things happen, but it’s not long before it falls back into the same rushed style of storytelling. It’s hard to really care about most of the characters when you rarely spend time with any of them, outside of a few core members of your party.

Adding to the rushed feeling of the game’s narrative is a lack of meaningful NPCs and sidequests. Most towns are just filled with characters chosen by backers of Indivisible’s crowdfunding campaign, leading to a lack of cohesion in NPC themes. After reaching the first main town, we decided to start talking to characters in an attempt to learn more about the area. However, most NPCs have little to say other than one-liners or something unrelated to Indivisible’s world. Towns end up feeling lifeless because of this, becoming areas to dump random characters in rather than a way to further the game’s narrative.

Exploration and battles also suffer from some odd design choices and clunky controls. While we may have compared Indivisible’s story to other RPGs, progression is handled in way that is closer to a linear metroidvania. Ajna starts off with a basic dash and jump, with new movement abilities allowing her to explore more of the map. In theory this should lead to some interesting platforming, but many of these abilities feel clunky to use, especially when you have to chain them together. Hanging for ceilings is the worst example of this, due to how inconsistent it can be. A lot of the movement options you unlock can also feel redundant, like the move that lets you do a higher jump or an aerial dash attack when you’ve already unlocked something similar beforehand. 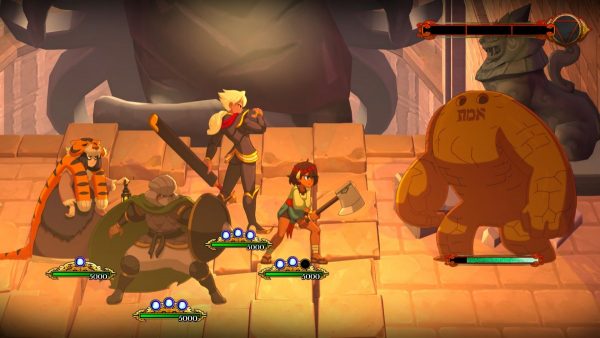 When it comes to battles, thing don’t seem so bad to start with. Using a battle system that’s somewhat similar to the Valkyrie Profile series, you take control of four characters that are tied to your controller’s face buttons. As time passes, each character’s action points fill up which can be used to attack enemies. Actions play out in real time, allowing you to combo different attacks together using your entire party. Holding up or down as you attack will change the move that is used, opening up more combo options. It’s an easy to understand system that starts off enjoyable as you unlock more characters to use, but the lack of real depth becomes a major issue.

Some enemies have gimmicks like shields and resistances to ground attacks, but these can be ignored when you use an iddhi attack. This uses a meter that builds up from attacking enemies and blocking attacks, and the rate at which it builds is so fast that you’ll always have it available for a fight. Fights also become easier as you progress further through the game, and we had little trouble defeating most enemies by just mashing buttons when every character’s action points had filled up. This leaves the characters with special gimmicks at a disadvantage, since there’s little reason to use them over the simpler party members.

Even Indivisible’s fantastic sprite work is held back by the rather dull environments. Characters and enemies look great, each having detailed sprites and animations, along with a small handful of stylishly animated cutscenes. Meanwhile the 3D areas are repetitive and unmemorable, lacking any impact compared to the 2D visuals. Some areas do at least have some interesting background songs to back them up, but the most memorable themes are tied to battles. It’s a shame too, since Lab Zero’s previous 3D work on Skullgirls was actually quite good, offering some distinct locations even with the relatively simple models used. The PS4 version also suffers from occasional stuttering when loading new areas, but this is not common enough to be a major issue.

Each of these unavoidable problems with the main aspects of the game cause the overall experience to become dull after a few hours. Constant backtracking is required for most of the game, and even when you unlock fast travel it’s not very useful compared to other games. Battles also lose their meaning, from both the lack of difficulty and a reason to fight in the first place. Levelling seems to have little impact on the difficulty of battles, and the biggest upgrades you can get come from items found during exploration or just going through the story. There’s very little here that makes Indivisible an RPG, and even less than can keep your interest through the rushed story and weak battle system. 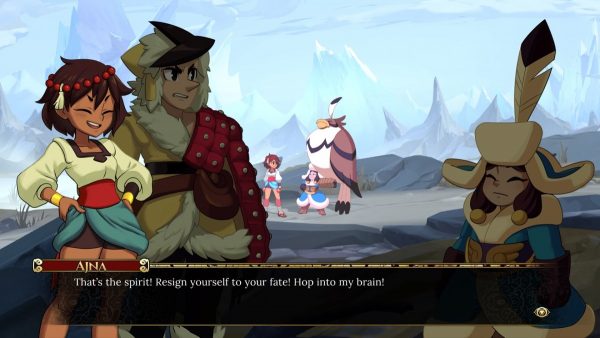 Indivisible has many interesting ideas, but never manages to combine them together in a meaningful way. Combat is flashy but lacks the staying power of other action games, and exploration is marred by lifeless areas and some clunky movement abilities. While patches may be able to work out some of these issues, the many fundamental flaws Indivisible has will always hold it back from being truly enjoyable.