Mary Skelter: Nightmares was a nice surprise, being a competent DRPG from a less than consistent developer, so we welcomed the announcement of a sequel last year. Our main worry though was that the original game was a fluke, and a second entry wouldn’t manage to build upon its solid foundations. Our fears were unfounded though, with Mary Skelter 2 being an improvement in nearly every way, even with a heavy amount of asset reuse. 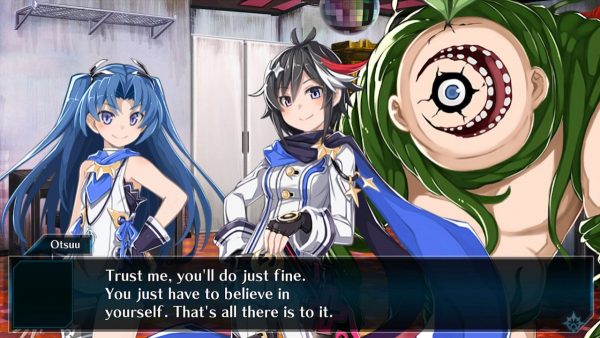 Mary Skelter 2 doesn’t continue the story of Mary Skelter: Nightmares in the way a typical sequel would. Instead of following on directly from the first game, it takes the setting and characters of the original and reworks them into something new, adding in a new protagonist and some surprising twists. Humans have once again been trapped by something known as the Jail, a living prison that tortures its prisoners. Otsuu and Little Mermaid are blood maidens, girls with the power to fight the horrors of the jail, and they work to try and free themselves from the nightmarish prison. After freeing some familiar faces, including Mary Skelter: Nightmares’ protagonists Jack and Alice, it seems like they may finally have the upper hand. However, Alice’s newfound Blood Maiden powers go berserk, separating the pair and setting the tone for what will be a far grimmer storyline.

The story has a strong opening, introducing some new and old characters into the mix, before everything goes off the rails. Jack is turned into a Nightmare, a grotesque being that usually protects the Jail, and important characters from the first game are unceremoniously killed off within the game’s first hours. From a story standpoint, Mary Skelter 2 easily justifies its existence, especially in regards to the characters that didn’t get much screen time in the first game. Hameln, who made a late appearance as an optional character, is introduced early on here, giving her more of a chance to shine. In fact, the entire cast is likely the strongest of any Compile Heart game, being mostly made up of different fairy tale inspired characters. There are also far more side events in the sequel, letting the cast interact with each other more outside of the main story.

If there was one major complaint to be had about the story, it’s that the English dub is very lacking. Not in regards to its quality, since most of the characters English voices are actually pretty good, but the number of English voice-overs in general. Scenes not being dubbed was something that plagued the first Mary Skelter, and many other games that Idea Factory International have published, but it’s even worse here. It seems that only a small percentage of scenes are actually voiced, with next to no dialogue outside of the story being voiced in English at all. We’ve played many games that feature no voice acting so it’s not too hard to put up with, but it’s hard to recommend playing in English when the included Japanese dub covers all dialogue and has a much bigger impact on important story events. 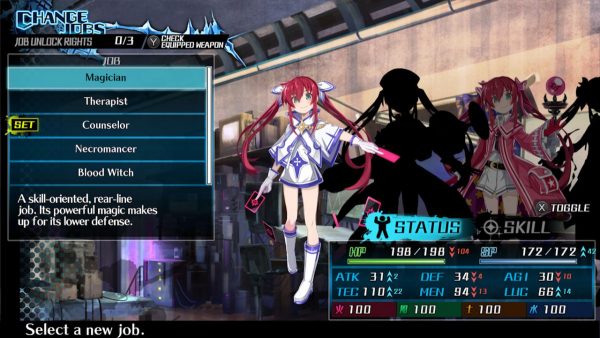 While the story may be where the biggest changes come into play, a number of welcome changes have been made to the dungeon crawling gameplay that make building your party even more enjoyable. Battles play out in roughly the same way, similar to most turn-based RPGs, though the maximum party size has been increased by one to accommodate for the larger amount of Blood Maidens you recruit. This allows for more potential party setups, but it can make gearing up more cumbersome as you have to go through even more equipment screens. Jack is still present during each battle, but his new form makes him a little less reliable than in the first game. He can reduce the corruption level of other party members which stops them from rampaging and potentially attacking allies, but this is now at the cost of his own sanity. This makes corruption management riskier, since you can’t just use Jack as frequently as before.

Jobs have also seen more of the best quality of life improvements, making it far easier to switch between jobs and learn skills. Each character has a selection of 5 jobs (not including DLC) that each have their own skills and stats. Once a job is unlocked, you can freely change to it for free unlike the first game, and skills from unlocked jobs can be learned even if you’re not currently using them. There is still a lack of information when it comes to skills (what is the difference between minor and minute damage?) but for the most part this is a more user-friendly game than Mary Skelter: Nightmares. Equipment is also far easier to obtain and upgrade, since you can grow weapons and armour in dungeons. These can be set in specific places to get better equipment, but for the most part it’s a hands-off way of gearing up your characters as you make your way through each dungeon.

Even with dungeon crawling being improved, the fact that Mary Skelter 2 reuses the first game’s setting also means that you’ll be going through some of the same areas again. The dungeon layouts are different, and there is a decent amount of new areas, but it’s hard to be as interested in exploring when you’re going through a reskinned version of a dungeon from Mary Skelter: Nightmares. In fact, a big chunk of the game is just assets taken from the original game, including enemies and effects. Enemy designs are still inventive, but visuals that looked passable on the Vita look dated on the Switch. There are even noticeable framerate drops during some dungeons when playing in handheld mode. It never reaches the same consistently awful framerates of the Vita original, but for how simplistic a lot of the game looks, these issues shouldn’t really be present at all. 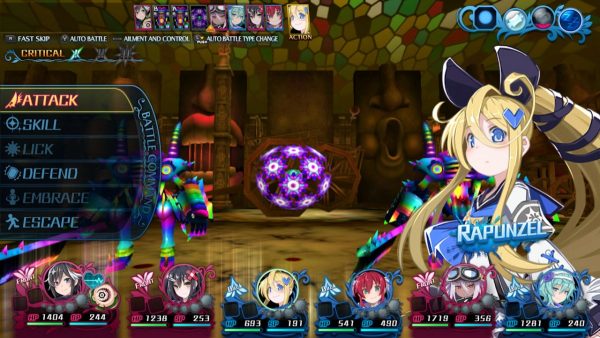 Despite the near non-existent English dub and ageing graphics, Mary Skelter 2 is another solid DRPG with a lot of content. When you take into account the fact that an updated version of the first game is also included, this is an easy game to recommend to RPG fans.