The Atelier series has been on the go for a long time, so it’s not really surprising that it would start to become stale after so many yearly releases. Atelier Ryza: Ever Darkness & the Secret Hideout is, aside from a mouthful of a subtitle, an attempt to shake things up. There are some welcome changes to the battle and alchemy systems, but a lifeless world and lack of events ruin what could have been a return to form for the franchise. 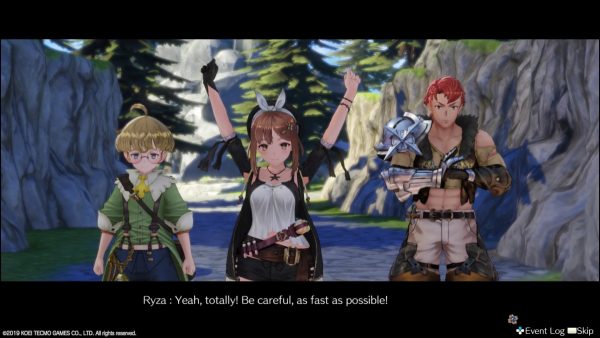 Atelier Ryza marks the start of what will likely be another trilogy of games, featuring a new world and, naturally, a new protagonist. Reisalin Stout, or Ryza to her friends, longs to leave her village and go on adventures, but it seems like her parents would rather have her help with the faimly farm instead. After a spontaneous trip to the nearby mainland that goes wrong, she encounters the travelling alchemist Empel and his companion. Realising the potential alchemy has to fulfil her dreams, she asks Empel to teach her everything he knows, kickstarting a brand-new adventure for Ryza and her companions.

Unlike many of the PS3-era Atelier games, Atelier Ryza has a heavier focus on its main story. There’s still the usual slice of life antics here, but compared to the Arland trilogy this is a more directed experience. Ryza is slowly taught new alchemy recipes and techniques, which require her to explore more of the mainland for materials. As she learns more about alchemy, Ryza also discovers more about why Empel journeys throughout the world, along with the island’s history. Atelier Ryza is at its best when the story is moving along, letting you learn more about its characters and the areas you explore. However, the overarching narrative is marred by poor attempts at drama and a lack of focus on the game’s side characters.

Before going into the story’s many problems, it’s worth mentioning that the small cast of main characters is actually quite good. Ryza’s trnasformation from a rebellious teen into a fully-fledged alchemist is handled well, being the driving force behind a lot of the story. Furthermore, her friends also have their moments, from bookworm Tao’s academic endeavours to the warrior-in-training Lent’s journey to be free from his father’s shadow. Events that focus on the main cast are far and away the strongest aspect of the game’s narrative, as they form stronger bonds with each other. When it comes to fleshing out the rest of the cast though, Atelier Ryza falls flat. There are only a handful of characters outside of the main 6, none of which are given enough time to become interesting. One of the worst offenders for this comes in the form of Lent’s father, who appears in a small handful of cutscenes. His abusive tendencies towards his son are pretty much ignored, leaving a bad taste in our mouths, and further highlights just how little time is spent on events other than the main story.

The game’s story overall gives off a feeling of being rushed, even during its best moments. There are far fewer side events compared to earlier Atelier games, and some chances for character development are glossed over. The island Ryza has lived on for her entire life ends up seeming completely lifeless because of this, since you’ll only be interacting with a tiny amount of characters. It’s like there wasn’t a clear direction on where to take the story so the main story ends up being rushed, but there isn’t an abundance of extra events to make up for it. There’s potential here for the world to become more developed in future releases, but as a single game Atelier Ryza fails to tell an interesting story. 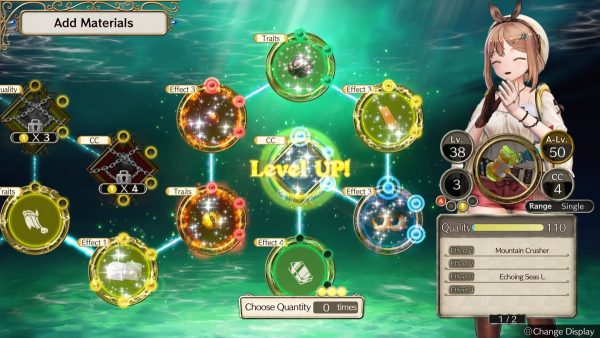 Using alchemy to synthesise new items and equipment unsurprisingly plays a big part in Atelier Ryza, and it’s one of two major changes to the series. In many ways, synthesis in this game is the easiest it’s been in a while, lacking a lot of the poorly explained or more obtuse mechanics of other entries. At its most basic, recipes for items are made up of material loops. These loops have requirements ranging from an exact item to something less specific like a plant or paper. If you insert an item into a material loop that also matches its element, you can unlock new effects for the item you’re synthesising. It sounds somewhat complicated, especially with how it’s explained during tutorials, but this system is far more straightforward. It’s easy to judge what effects you can gain when adding items to the material loops, and there’s even an option to automatically complete a synthesis with high- or low-quality items. The only real complaint we have is that it’s almost too easy, leading to synthesis becoming a little boring later on, though this is still more welcome than an overly complicated system that ends up being frustrating.

A completely new style of battling is the other big shake-up in Atelier Ryza, opting to go for a real-time battle system over the usual turn-based systems the series is known for. It’s not an action-RPG though, being closer to the ATB system from older Final Fantasy games instead. When it’s a character’s turn to act, you have a familiar set of actions that can be performed. Regular attacks do a small amount of damage, but let you build action points. AP is mainly used for skills, but it also has a few other functions. If you max out your AP, you can increase your tactics level in battle, improving your attacks, skills and the max amount of AP that can be held.

Along with HP, both your party members and monsters you fight have a stun meter that decreases as they take damage, stunning them when fully depleted. When at low health, enemies will often start charging up a heavy hitting attack which can only be stopped when they’re stunned. Throughout battles, party members you’re not controlling will issue action orders, such as ‘attack with this element’ or ‘use an item’. Fulfilling these orders will lead to those party members doing a follow-up attack, which makes stunning an enemy far easier. By using 10 AP, you can also use quick actions to act even when it’s not your turn, leading to further follow-up attacks from allies. 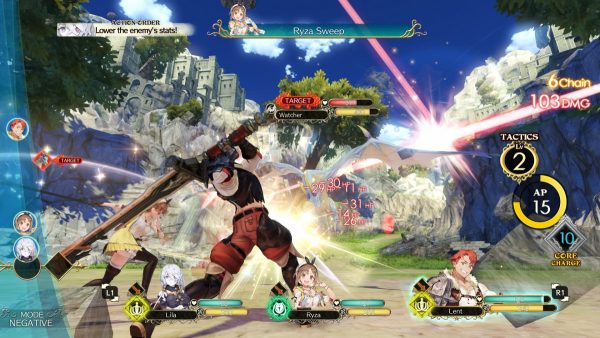 Atelier Ryza’s battle system is enjoyable for the most part, making even regular enemy encounters more interesting than mashing one button. You constantly have to decide how to spend AP, splitting it between increasing your tactics level, using skills and quick actions. Unfortunately, even with a radically different battle system the game still has the same problem as other modern games in the series: Items. With no time limits for objectives, crafting incredibly strong offensive items is easy to do early on. This is made worse by the simple crafting system, along with a few other questionable additions, since it’s far easier to synthesize items with the best effects.

The first change comes in the form of gems, a currency you gain by converting existing items and materials. Gems allow you to keep adding to the material loops of an item even after you’ve synthesised it, ignoring the usual item limit during normal synthesis. Using these, it’s not hard to max out most material loops of an item, boosting its effects and decimating the majority of enemies you face. What makes this even worse is the fact that items aren’t even consumed on use any more, instead using up a separate resource called core charge. Each item has a CC cost which can be refilled by converting other items or returning home. Converting items doesn’t consume them either, meaning that you can just spam your strongest items, converting unused items to restore CC when necessary, and forgo any sort of strategy. You can crank up the difficulty level to mitigate this somewhat, but it’s still a shame to see Atelier Ryza fail at improving the series’ balancing problems, something which has become worse ever since time limits were removed.

If it was just some problems regarding game balance and a poor main story, Atelier Ryza wouldn’t be so bad. However, the rushed story actually has a far bigger effect on the other aspects of the game. The world of Atelier Ryza feels so uninteresting thanks to the reduced amounts of events, with many of the villager’s backstories being relegated to a few lines of dialogue during side-quests. Most NPCs also only have a couple of things to say during the entire game, giving you little incentive to talk to them and making it hard to really care for the residents of the island. A lot of this can also be attributed to the game’s poor visuals, from the bland environments to the stiff way characters are animated. The series has always had trouble keeping up with modern hardware, and Atelier Ryza’s doesn’t change this trend.

It’s striking just how different the rest of Atelier Ryza is compared to battles and synthesis. Gathering and exploration is dull, even with the new focus on using different gathering tools. There are rarely secrets to find, and the same enemies are used repeatedly. By the halfway point of the game when most of the optional events dried up, it was difficult to stay motivated after going back and forth between the same areas, fighting the same enemies, for the sake of progressing the story. 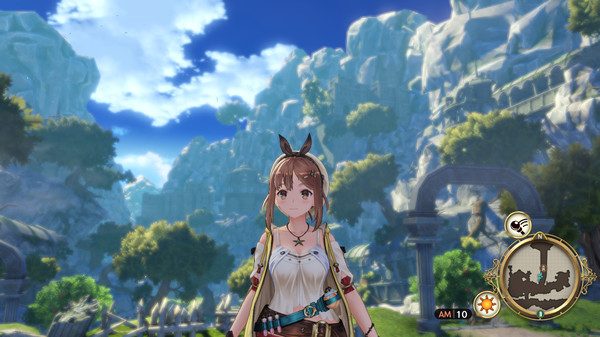 It’s hard not to feel disappointed with Atelier Ryza. In some ways it’s the best the series has been in a long time, but as a whole we can’t ignore just how lacking it feels. The island and its inhabitants are mostly soulless, the dated visuals only adding to this sentiment. Future Atelier games really need more time to develop, otherwise we’ll just end up with another underbaked release.