Even with all the progress the video game industry has made over the years, it’s hard to deny that there have been some unfortunate trends popping up. Games full of microtransactions, unfinished releases and copycats trying to follow the latest trends. SuperEpic is a less than serious metroidvania that takes aim at this unfortunate side of gaming. From a satire standpoint though it’s not very effective, and as a metroidvania it’s nothing special. 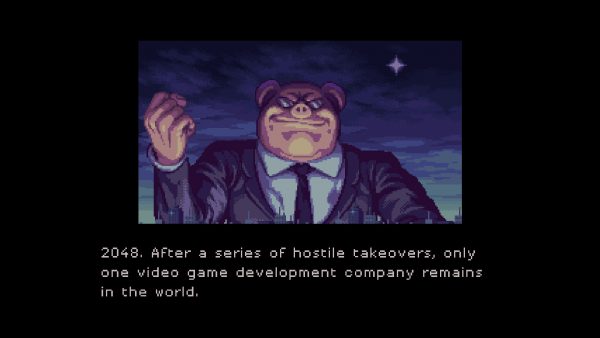 From the get go, SuperEpic pulls few punches in making the theme of the game known. Regnantcorp have enslaved the world through the use of free-to-play mobile games, keeping the populace addicted and easy to control. TamTam, a raccoon, and his llama friend are some of the only people resisting the company’s influence. They decide to take down Regnantcorp after being contacted by a mysterious individual, who offers to help them on their quest.

While trying to parody gaming’s many problems is far from a bad idea, this game throws its message in your face during every cutscene. It’s hard to care when a new character appears, because 9 times out of 10 they’ll only be used in a single area before they’re never seen again. Each Regantcorp employee that you face is there to reference something and nothing more. If that wasn’t enough, a lot of the dialogue is poorly written. A lot of lines are awkward to read or have noticeable spelling and grammar mistakes. Fixing these would do little to improve the story, but when you take the game’s premise into account it ends up feeling somewhat ironic.

Gameplay is at least solid, if a little uninspired. Progression follows a similar pattern to most games of this type, as you explore the large Regnantcorp office building and acquire abilities that open up access to new areas. TamTam can dash to avoid attacks and move faster, though this is tied to stamina unlike the unlimited backdashes in Castlevania. Nothing overly complicated even with the unlockable movement options, but they get the job done. 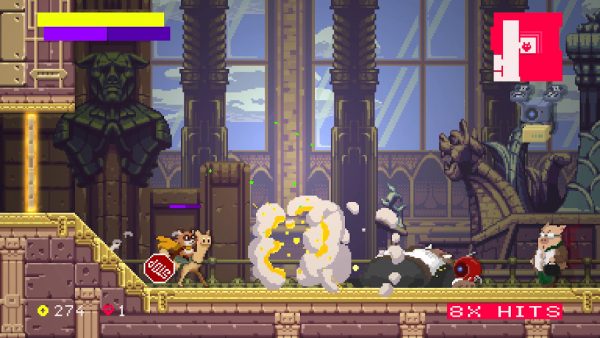 Rounding out the basic set of moves are your attacks, which consist of a regular combo, a launcher and a slam attack. Enemies can be juggled while in the air, and this usually ends up being the best way to tackle most opponents outside of bosses. Regular enemies are… not very interesting to fight, since they’re unable to attack while being attacked. With how easy stunlocking enemies is, and the lack of unique weapons to change your attacks, it’s often less tedious to just skip fighting and rush to the next area.

Upgrades could have been a way to spice up how you play, but most of them are either bland or are less effective than just juggling enemies. Upgrades range from basic stat upgrades like more health and stamina, to stronger weapons and armour. As mentioned earlier, the weapons don’t actually have different movesets. The only noticeable difference ends up being their attack speed, but this has little effect on how you play. Special attacks are unlocked later on, but the amount of damage these do is pitiful.

Buying new equipment costs money, which is where minigames come into play. Sure, you could collect money by defeating enemies, but all that would do is make fighting even more tedious. Instead, the best way to increase your funds is by scanning QR codes throughout each area. Some of these lead to mobile minigames that parody popular mobiles games like Flappy Bird and Crossy Road, though the rewards from these are not amazing. The real money maker is an idle game that gives you progressively larger rewards as you add more parts to it. 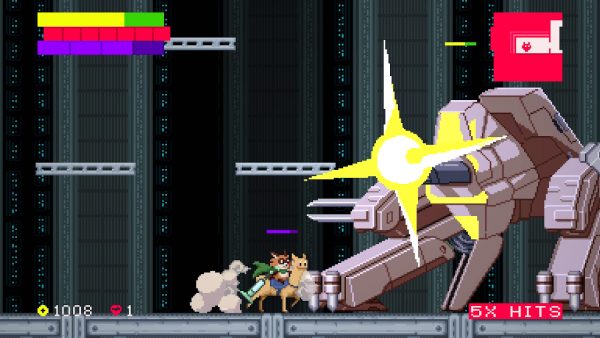 The idea of having minigames outside of the main game is not a bad one, and it fits with the game’s plot and overall tone, the problem is that they’re as throwaway as the main cast of characters. You’ll play a bland mobile game parody for a minute or two, grab the code you need in SuperEpic, then forget about it. Again, this isn’t out of place in the game’s setting, it’s just that having to have a phone ready in case you find a new QR code is unnecessarily clunky. The amount of money you can make with the idle game also unsurprisingly takes away most of your incentive to fight enemies.

While the gameplay and story have their flaws, the same certainly couldn’t be said about SuperEpic’s presentation. Everything is lovingly rendered in 2D, and the sprites look crisp even when playing in handheld mode on Switch. Each area of Regnantcorp is not only unique, but is filled with a whole host of creative enemy designs. Considering the lack of subtlety elsewhere, it’s surprising to see how little of the game visually is a parody of other games. There are some clear references from time to time, but even then SuperEpic looks distinct from the games it’s taking inspiration from.

SuperEpic is far from a bad game but, contrary to the name, it’s distinctly average in most areas. By the numbers exploration, repetitive combat and a story that runs the game’s theme into the ground. Indie metroidvanias aren’t exactly hard to come by nowadays, so this should only be played as a last resort (or to admire the fantastic spritework.)