Considering just how many Compile Heart games we’ve reviewed, you’d think that we’d have seen the worst of their output. Arc of Alchemist has clearly proved us wrong though, combining the absolute worst parts of their previous titles. Monotonous gameplay, a threadbare story and poorly thought out mechanics make Arc of Alchemist a slog to play through and sets new lows for an already inconsistent developer.

Taking place on a post-apocalyptic Earth, Arc of Alchemist details the story of a small group trying to reverse humanity’s path towards destruction. Quinn, the leader of this expedition, is searching for the “Great Power,” something that can supposedly save humans. Her team heads into the Desert of Beginnings where this power lies, fighting through the various monsters and machinery that roam the now barren Earth. Compared to most of Compile Heart’s previous work, this is a more sombre story, free of fanservice outside of a couple of character designs. This does not mean that it’s very good, however.

The story suffers from being far too short, especially for how many main characters are introduced at the start. You’re dumped right into the game with 7 party members, and little is done to make you care about any of them. Of said party members, only Quinn has any real impact on the story, as the rest are either completely one-dimensional or have next to no story scenes. Jester is the perfect example of this; he could have been removed from the game and the story would not have been impacted at all. By the end of our less than 10-hour playthrough, there wasn’t a single character we found interesting. 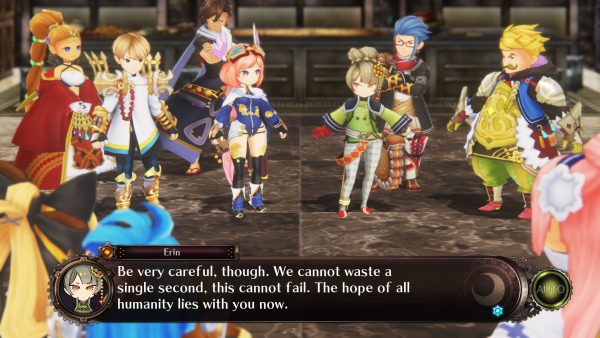 A poor story could have been forgiven if the action-RPG gameplay was at least solid, but it seems like the developers have learned little from their previous forays into the genre. Characters only have 2 main attacks, determined by the weapon they’re using. Combat consists of mashing one of these attacks until an enemy dies and then moving onto the next. It’s dull and offers no opportunities for creative combos or anything outside of hammering the same attack button repeatedly. There are special attacks that each party member can use, though most of these are far too slow to be useful.

Arc of Alchemist also throws in some base building mechanics in an attempt to add variety. This also falls flat due to its overly simplistic implementation. Your home base can be improved by adding new buildings, each offering some sort of benefit like unlock new items and weapons for purchase. Creating new buildings require money and materials, both of which being strangely easy to acquire considering the game’s setting. Placing down buildings in certain configurations seemingly gives larger bonuses to the benefits they give, but it’s inconsistent and never explained in-game. In theory the town building would give you more of an incentive to explore, but in practice most upgrades are easy enough to create without much effort. 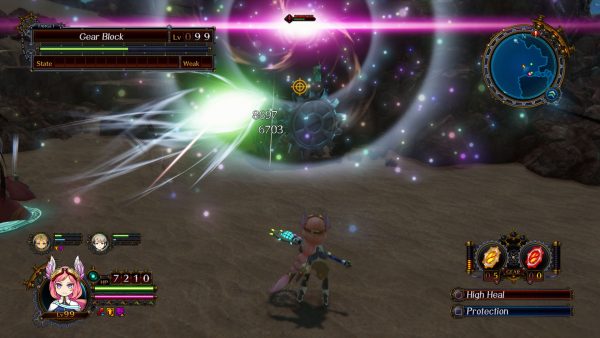 Speaking of exploration, the areas in Arc of Alchemist may be the worst we’ve suffered through in a Compile Heart game so far. Due to most of the world’s resources being depleted, each area is made up nearly entirely of bland deserts. This not only leads to a lot of asset reuse; it also negatively affects the way areas have been designed. Instead of the usual small maps, each area in the game is instead made unnecessarily large. Big maps aren’t exactly a problem, as games like Xenoblade Chronicles have already proved that exploring vast open areas can be fun. Arc of Alchemist’s mistake is making much larger areas without filling them with anything to do. Running through bland, empty deserts is not fun, especially when what you’ll be doing otherwise is just mashing a single button.

All these serious issues and poorly thought out ideas are accompanied by a combination of ugly visuals and a horrendous framerate. Arc of Alchemist’s chibi-style character models are simplistic at best, and some are downright ugly. Compounding this is the incoherent art style that often mashes more normal faces with disproportionate bodies. It almost looks like multiple artists worked on some of these designs, with the result leading to these unappealing models in the final release. For how simplistic the game looks – often resembling a low budget PS2/PS3 game – it’s remarkable just how badly the game performs. Framerate drops are commonplace, and it’s rare for it to stat consistent even when nothing is happening on screen. 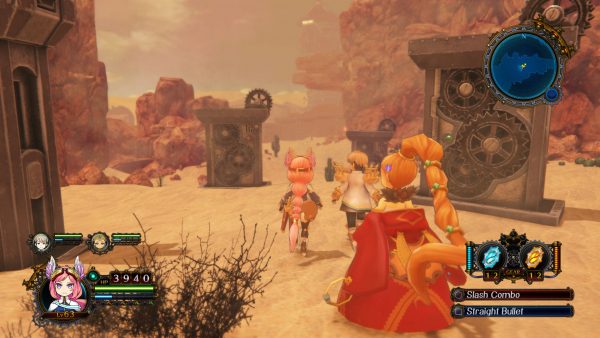 Outside of a couple of decent music tracks (that end up being repeated far too often) there’s not a lot to love here. Arc of Alchemist shows a clear lack of understanding for what makes action-RPGs fun, and it does nothing to build upon what experience the developers should have with the genre. Just play something more exciting like Ys VIII and pretend you never heard about this game.