The long running Princess Maker series has never really had much competition, its unique management gameplay only influencing a handful of games like Long Live the Queen. Ciel Fledge is definitely aiming to fill this void, though it does try to differentiate itself in some ways. Here’s our early impressions of the game, taking place over the first few in-game months. 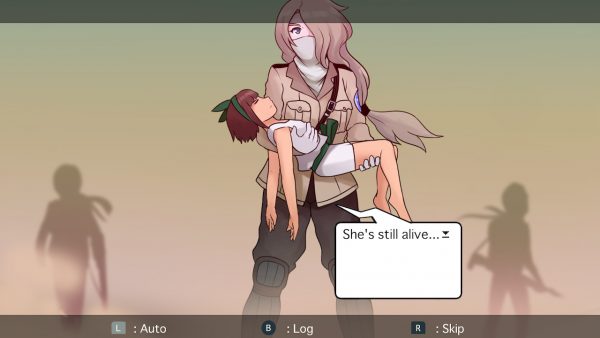 Instead of Princess Maker’s fantasy setting, Ciel Fledge takes place on a floating city known as an Ark. The planet below has been ravaged by humans, forcing them into the skies to avoid the brunt of their attacks. During one such attack on the planet, soldiers find an amnesiac girl who is then brought back to one of these Arks. Your character is tasked with looking after this mysterious girl, raising her over the next 10 years while also looking into her past. This narrative doesn’t have much of an impact on the early game, so it’s hard to say how story-heavy the game becomes later on.

Before you can start raising your adopted daughter, you create your character’s backstory. Where they were born and the job they have will give Ciel different positive and negative traits. These can give you increased stat gains and advantages during the battle sections, though all of them come with downsides. Since these bonuses stick around for the entire 10 years the choices you make now are important, though it is a little strange that your occupation has such a large influence on Ciel from the start.

Most of your time in Ciel Fledge is spent choosing what your daughter will do over the week, which takes the form of a simple calendar. Here you set each day’s activity, taking into account holidays and other events. Different activities will raise Ciel’s stats, along with specific skills that can be leveled up to unlock traits and more specialised activities. For example, the strength-based gymnastics classes will eventually unlock swimming lessons. There’s usually always something to work towards, even if it’s not initially obvious what the end goal of your choices is. 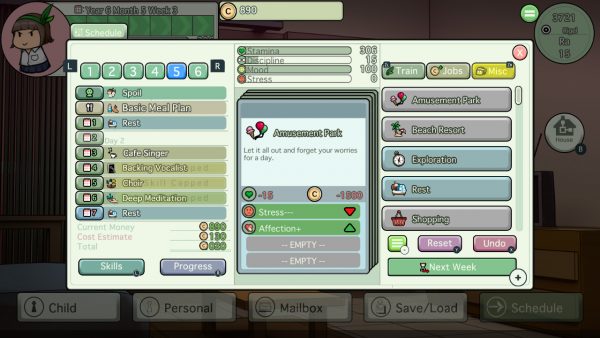 One area that stands out from Princess Maker series is the battle system, which is used for more than just fighting enemies. Occasionally when Ciel is in the middle of an activity a battle prompt will appear. Accepting these prompts changes the game into an RPG/match-3 hybrid, where you match up coloured cards to act and use special moves. Even though it’s presented as a fight, most of these encounters are usually more mundane activities like tests or cleaning. It’s an interesting idea that breaks up the passive main gameplay, and it does give you more of a reason to build up different skills, but there isn’t much strategy involved. Stats seem to be the deciding factor in whether you succeed or not, with how well you match cards or use skills being mostly irrelevant.

As we played through this build of Ciel Fledge, it was clear that the full game’s presentation is going to be somewhat lacking. Character sprites are very plain, and their default poses lack much personality. Environments are similarly uninteresting, leading to a game that isn’t particularly pleasing to look at. Dialogue also suffers, as the majority of conversations do a poor job of conveying each character’s personality. What little story there is early on becomes hard to engage with, something that will likely take away from the bond the game is trying to build with Ciel.

Ciel Fledge does hold some promise as a new take on the niche daughter raising genre. However, this potential is held back by a lack of polish compared to its peers. Some of these issues will likely be addressed before the game’s release later this month, and we can only hope that the final product feels like a more complete package.