As we’ve mentioned in our review of Chaos;Child, Steins;Gate is one of the most influential visual novels ever released. It ensured the popularity of the long running Science Adventure series while also making the rare successful jump to anime. Steins;Gate ELITE combines both the classic visual novel and anime adaption into one stylish package. 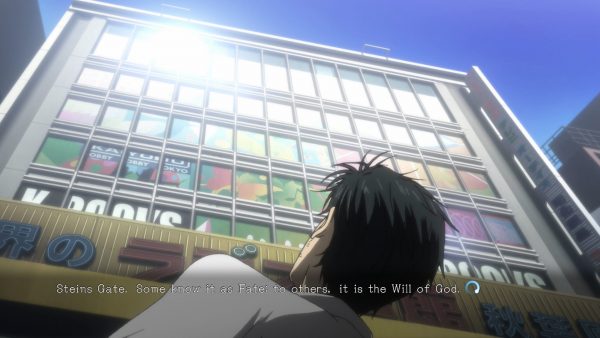 The protagonist of Steins;Gate ELITE, Rintaro Okabe, is an eccentric individual that likes to think of himself as a mad scientist. He talk to himself, creates useless ‘gadgets’ and uses the nickname Hououin Kyouma due to considering his true name uncool. Basically, he’s not the most mature human being on the planet. After attending a seminar on the possibility of time travel, along with accidentally creating a functioning time machine, his somewhat normal days start to take a dramatic turn for the worse.

Most of Steins;Gate ELITE’s first half is exposition, giving you a clearer picture of Rintaro’s worldview and motivations. You get to see what life he has been living for the past few years, and the game spends a lot of time detailing his interactions with others. The slow build-up really helps to make the events of the game’s latter half feel even more impactful, especially a certain important choice near the end. Rintaro is an excellent protagonist, flawed but also believably human, even if he can be a little over the top at some points. The rest of the cast is similarly well written, from the perverted ‘super hacker’ Daru to Rintaro’s airheaded childhood friend Mayuri. Each has their own unique personality without being overly annoying, though some may be put-off initially by some of the main character’s eccentricities. 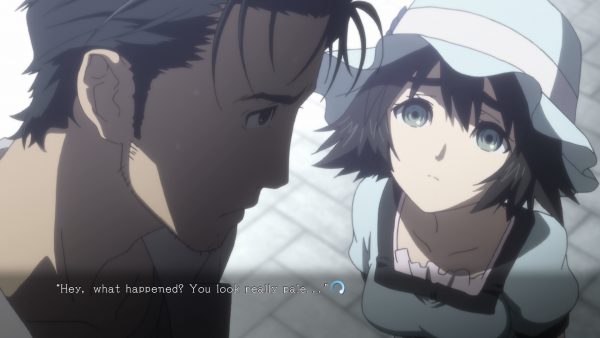 Steins’Gate’s multiple routes make a return in ELITE, which also leads to one of the more annoying mechanics in the game. At certain points of the story you will be sent text messages by different characters. You’ll then usually be able to reply to the message by selecting highlighted words within it. Most of your replies will not affect the story, and ignoring these entirely won’t matter. However, you are required to send the right replies to a few text messages to unlock the true ending route, and these choices are not very obvious even after repeating the story multiple times. While this may not be as awkward as Chaos;Child’s way of choosing routes, it can still lead to a fair amount of trial and error.

As with most visual novels, the original release of Steins;Gate used static sprites and the occasional illustration for special scenes. ELITE instead uses animations from the anime adaption and for the most part it works well. The story is still told from Rintaro’s perspective, but the change in visual style gives you a different perspective on events during the game. Instead of having Rintaro hidden behind the camera, you can instead see how he interacts with other characters outside of just the dialogue. His eccentricity combined with these animations really helps to give more life to the story and, this might be a minority opinion, looks far better than the inconsistent artwork used previously. There is also little difference between the PS4 and Switch versions of Steins;Gate ELITE, with the Switch version using slightly lower resolution assets compared to PS4. The slight change in image quality is not noticeable when using handheld mode on Switch either way, and was our preferred method for playing through ELITE.

This isn’t to say that the change to anime visuals has been a completely perfect transition. Animations will frequently be reused for different scenes, though usually only for scenes where different animations wouldn’t have made much difference. The bigger problem is that a certain route in the game ended up being heavily cut down, likely due to not being featured in the anime. It may not be the most important route in regards to the full story, but its removal is strange considering how other scenes ended up having new animations made for them. Steins;Gate ELITE should have been a chance to fully animate every event from the visual novel, so it’s a shame that this isn’t quite the definitive experience we were expecting. 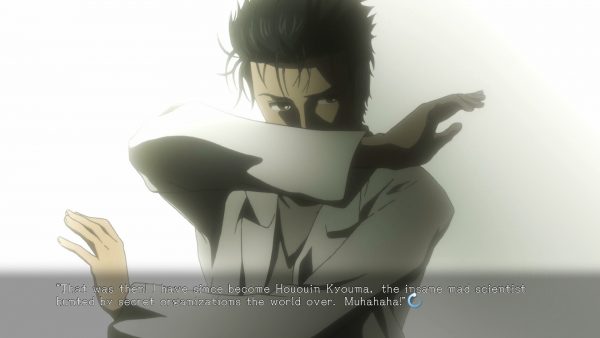 Steins;Gate ELITE successfully manages to take the best parts of both the original visual novel and anime with only a few missteps along the way. It would be hard to recommend this to someone that has already experienced Steins;Gate in some form before due to the cut content, but it is a great way of introducing newcomers to the series.